If Taxis Want to Survive, They Should Learn From Uber 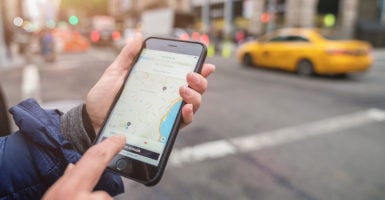 Courts across the country have concluded that taxi companies have no right to exclude competitors from the market. (Photo: Mlenny/Getty Images)

Last month, a three-judge panel of the 3rd U.S. Circuit Court of Appeals affirmed the dismissal of a case brought by the Philadelphia Taxi Association and 80 taxi companies, alleging violations of antitrust law by ride-sharing giant Uber.

Specifically, the once dominant taxi firms wanted the court to rule that Uber’s initial operations in Philadelphia were “illegal, predatory, and led to a sharp drop in the value of taxicab medallions as well as a loss of profits.” Traditional taxis are, they say, losing money due to the undesired competition—and they wanted courts to bail them out.

But, as Judge Marjorie Rendell wrote in the court’s opinion in Philadelphia Taxi Association, Inc. v. Uber Technologies, Inc., the purpose of antitrust laws are “to protect competition, not competitors.”

There is a poignant lesson here, one that could not have been more directly or pithily delivered: If cab companies want to survive, they have to compete. In a free market, after all, it’s consumers who decide winners and losers, not judges and politicians.

It may seem strange that taxi companies are only just learning this lesson. They’ve been around for decades, after all.

But for most of that time, taxi “markets” in many major cities weren’t really free markets at all. For decades, regulators in cities like New York, Boston, Chicago, and others treated taxis more like public utilities. Every aspect of the industry was tightly regulated, with officials settings prices, licensing drivers, and strictly controlling the number of taxis allowed on their streets by means of a “medallion system.”

A taxi medallion is a small plaque issued by the city that confers the right to operate a single taxicab. Cities strictly cap the number of medallions, meaning that someone looking to start a cab company has to buy a medallion—or several—from an existing owner. In other words, if a new firm wanted to enter a market, it could only do so when an established player was willing to allow it.

This arrangement was uncompetitive by design. In the 1930s, the justification for medallions was claims of “ruinous competition.” As a result, demand for taxi service almost always outstripped the supply of taxis, meaning there was no downward pressure on prices. And with no real competition between companies in a given market, there was no incentive to innovate or improve service.

The winners in this arrangement were the medallion holders, who saw their profits soar far above what they could earn in a competitive market, and saw the value of the medallions themselves appreciate considerably. According to the court in Philadelphia Taxi Association, medallions in Philadelphia rose from $65,000 when the system was implemented in 2005, to $545,000 in 2014.

The losers, meanwhile, were the riders forced to pay above-market rates for poor service, and the drivers who, in many cases, were forced to pay owners, by the shift, to lease a medallion.

Uber, and later Lyft and other ride-sharing companies, changed this dynamic, entering cities that had been previously closed off for decades and bringing cheaper, app-based services to the market. Customers and drivers flocked to the new services—a trend many city governments initially tried to stop.

While governments have largely moved on, taxicab companies continue to fight for a return to the old days, filing lawsuits in hopes that judges will do for them what politicians no longer will: abolish the competition. The case in Philadelphia is just the latest in a long series of legal battles seeking a return to the rosy days before Uber.

In one colorful lawsuit, the Boston Taxi Owners Association sued the city of Boston in 2015, alleging that it literally owned the for-hire market, and that competition amounted to an unlawful taking of private property without just compensation.

Chicago cab companies made similar claims, but Judge Richard Posner of the 7th Circuit wrote an opinion for that court pointing out that “medallions authorize the owners to own and operate taxis, not to exclude competing transportation services.”

Taxi firms lost in both of these fights, and in many others.

They tried anew in Philadelphia Taxi Association, claiming that Uber is engaged in “attempted monopolization” in violation of federal antitrust laws.

Specifically, the Philadelphia cab companies alleged that Uber illegally operated in the city for two years, from 2014 until 2016, when the state government adopted a transportation network company law authorizing its activities.

In that time, Uber “inundated the Philadelphia taxicab market illegally with their non-medallion vehicles” and “improperly lur[ed] drivers away from medallion companies” by, among other things, offering “financial inducements, such as reimbursements for the cost of gasoline.”

The taxi firms argued that these actions allowed Uber to offer a competing service at a lower price and deprived them of drivers, which has damaged their business and resulted in substantial revenue loss and a collapse in the price of taxi medallions.

The court candidly acknowledged that Uber has done damage to taxi business interests, but rejected the claim that Uber’s entry into the market was damaging competition itself: “Rather, this bolstered competition by offering customers lower prices, more available taxicabs, and a high-tech alternative to the customary method of hailing taxicabs and paying for rides.”

Rendell then reminded the taxi firms that “[r]unning a business with greater economic efficiency is to be encouraged.” Uber’s ability to hire away taxi drivers merely represents “cost efficiency and competitive advantage,” not an attempt to lock taxis out of the labor pool.

The court also rejected the claim that Uber’s entry into the market in the days before the transportation network company law was enacted amounted to a violation of the antitrust laws, pointing out that, if anything, it “created more competition.”

And while taxi companies may eventually fold in the face of competitive pressures from Uber, the result will not, as taxis suggest, automatically be the establishment of a monopoly. After all, Uber is hardly the only ride-sharing service in existence.

Ultimately, the 3rd Circuit concluded—as have courts across the country—that taxi companies “have no right to exclude competitors from the taxicab market.”

The lesson for taxis is simple: The old days of cronyism and state-backed cartels are over. They have been replaced, by popular demand, with a dynamic market in which companies compete for riders with lower prices and novel services.

Neither courts nor politicians are showing much interest in turning back the clock, much as taxi interests might want them to.

These losses are not the end of the road for taxis. Competitive markets are open to anyone. If taxi firms can embrace innovation, competition, and devote their lobbying efforts to pushing cities to deregulate them, perhaps a nimbler taxi industry can do a bit of market disruption itself and win back riders.

Of course, that outcome is not guaranteed. But in this brave new world, only one outcome is: that consumers will continue to benefit from the competition.