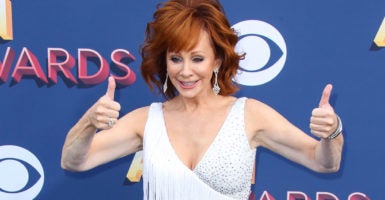 "It’s going to be a fun night … I want it to be positive and uplifting," host Reba McEntire said in an interview prior to hosting the awards. (Photo: Xavier Collin/Image Press Agency / MEGA / Newscom)

On Sunday night, longtime country music star Reba McEntire lived up to a promise, made two days earlier, to steer clear of politics as host of the 53rd annual Academy of Country Music Awards telecast.

McEntire had told Us Weekly in an interview published Friday that she and the program wouldn’t follow the lead of other awards shows, because she thinks the ACM ceremonies should be about entertainment. “I want it to be positive and uplifting,” McEntire said.

What a welcome concept, especially at a time when the left seeks to politicize virtually everything.

The ACM ceremonies, shown live on CBS from the MGM Grand Garden Arena in Las Vegas, were refreshingly free of Trump-bashing and, more specifically, devoid of gun control demagoguery.

The show couldn’t very well pretend the tragedy didn’t occur, of course, and a brief opening montage acknowledged it, but did so with dignity.

Jason Aldean, who was on stage at the festival when the shooting began, was joined Sunday night by fellow country music stars Miranda Lambert, Luke Bryan, Maren Morris, and Thomas Rhett in a tribute to the victims, the country music community, family and friends, and “the healing power” of music.

We are all reunited in Las Vegas tonight through the healing power of music. America, this is your #ACMawards. pic.twitter.com/uMSJ2nvAj6

“This year, the idea is to have fun. There’s a lot of political things you can address, stuff going on in the world. That’s not our theme,” McEntire, whose music career has spanned more than 40 years, said in the interview with Us Weekly.

“Our theme is to have fun, not to be mean, not to be catty, just to have a great night of entertainment, great music, seeing everybody, and introducing new music.”

As though to keep things on track, a bit more than halfway through the three-hour program, the frequent ACM Awards host quipped, “They told me I can’t talk about politics, drinking, or breakups. They do know this is a country music show, right?”

Like nearly everyone else, McEntire presumably has opinions on the issues of the day, but unlike Jimmy Kimmel and all too many others among the self-important left-wing Hollywood glitterati, she recognizes that there’s a time and a place for politicking—and that an awards show is neither the time, nor the place.

Just because celebrities have an oversized soapbox and a media megaphone that the rest of us don’t have, doesn’t mean they should exploit it or that their opinions should somehow carry more credence—much less that we should heed what they have to say, as though they are some kind of oracles.

The dozens of performers and awards presenters alike at the ACMs instead heeded talk-radio host Laura Ingraham’s sage advice to Hollywood and the music industry that provided the title of her 2003 book: “Shut Up and Sing.”

None of the award winners made any political remarks, directly or obliquely, in the course of their acceptance speeches.

At the end of the evening, however, upon receiving the top award, entertainer of the year, Aldean acknowledged it had been “a rough year.” He thanked everyone who had reached out with love and support to him and his band over the past six months since the festival.

“It meant the world to us. To my Route 91 people, you guys are in our hearts, always,” he said. “I love you guys, and we love Las Vegas. Vegas strong, baby.”

The conspicuous lack of gun control politicking was certain to rankle left-leaning music industry journalists who have taken to castigating the country music industry for not clambering aboard the rest of the movie-and-music industrial complex’s bandwagon, which tilts decidedly portside.

More specifically, entertainment critics have been openly critical of the country music industry for not joining the gun control crusade after the Route 91 festival.

It may not have occurred to Richards that perhaps country music fans don’t want to be lectured to by their favorite stars—or that maybe the stars themselves have no desire to do so.

It’s been said that politics and religion don’t mix, and for many people from the mostly rural American heartland—derided by the left as “flyover county”—country music is something of a secular religion. It, too, should remain untainted by left-wing politics.

You could ask the Dixie Chicks, whose careers tanked in 2003 after lead singer Natalie Maines criticized President George W. Bush during a concert in London. It was another instance of “wrong place, wrong time.”

Furthermore, do Richards and other media critics honestly think that deranged killers such as Las Vegas gunman Stephen Paddock are going to pay any attention to anti-gun rants from celebrities (be they country music stars or otherwise), much less be dissuaded from committing their hideously evil actions?

It would be interesting to know whether Richards would be equally gung-ho about the politicization of country music if the message from Nashville were contrary to the liberal narrative on guns (for instance, if a star were citing John Lott’s book “More Guns, Less Crime”) or anything else.

I could be wrong, but my guess here is he would say, “Shut up and sing.”