Out With the Old Tax Code, in With the New 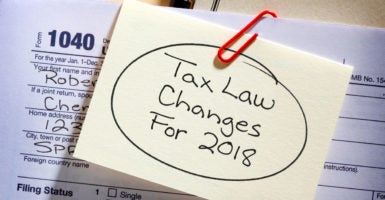 Thanks to tax reform, about nine out of 10 Americans will have larger paychecks for the 2018 tax year. (Photo: DNY59/Getty Images)

Say your fond farewells, because this April marks the last year you will have to pay your taxes under the old tax code.

Next year, when you sit down to file your taxes for 2018, you and your family will send less of your paychecks to Washington.

In 2018, the average American will work the first 109 days of the year to earn enough money to pay their full tax bill. This year, thanks to tax reform, we will work three fewer days to pay our taxes than last year. That’s three more days of income you and your family get to keep for yourself.

Each year, the Tax Foundation calculates Tax Freedom Day—the day we are able to begin working for ourselves and our families, rather than Washington. Mark your calendars, Tax Freedom Day 2018 is April 19.

The Treasury Department estimates that next year, about nine out of 10 Americans will have larger paychecks thanks to lower tax rates, a larger standard deduction, and an increased child tax credit. But everyone wants to know exactly how the new tax code will help them, personally.

Under the old tax code, John and Sarah Jones, a married couple with combined earnings of $75,000, three children, and a home mortgage, just finished calculating that they will pay $1,753 this year. Next year when they file their taxes, their federal income tax bill will decline by $2,014. In fact, because of the larger $2,000 child tax credit, they will get a refundable credit of $261.

Now that the political rhetoric has subsided, it is clear that families across America can expect a sizable tax cut when they file their taxes next year.

Tax reform did more than cut personal income taxes. It was designed to boost the economy by making it easier for businesses to hire Americans and invest in the United States. The early evidence shows that tax reform is indeed contributing to more new jobs and higher wages for working Americans.

Fiat Chrysler announced it will move some of its manufacturing plants in Mexico back to the United States, invest more than $1 billion in Detroit, and add 2,500 new jobs.

A small Wichita business gave each of the company’s five employees bonuses, ranging from $4,000 to $6,000. Meanwhile, tech giant Apple announced it will invest $350 billion and add 20,000 employees in the U.S. over the next five years.

New lower tax rates for businesses and individuals have made the U.S. competitive again and given Americans much-needed tax relief. For tax reform to succeed, however, Washington must constrain federal spending to reduce pressures to raise taxes in the future.

The true measure of taxes is not what we pay, but what the government spends. If you include 2018’s federal borrowing, Tax Freedom Day—or more aptly, Spending Freedom Day—is 17 days later, on May 6.

Every American who just received a tax cut should be a newly minted deficit hawk. Congress made many of the tax cuts temporary, so without serious spending reforms, there will be continued pressure to let taxes rise again.

To solidify the gains of tax reform, Congress must make the existing tax cuts permanent and bring spending under control. Phase 2 of tax reform is nonnegotiable.

For now, we can bid adieu to the old tax system and welcome 2018 with lower taxes and a healthier economy.