Andrew McCabe Lied. So Will the FBI Apply the Same Rules Against Him That It Applies to All of Us? 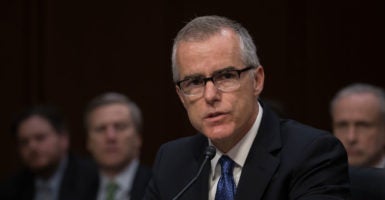 The new report from the Justice Department inspector general concludes that McCabe, the former FBI deputy director, lied to then-FBI Director James Comey, to other FBI agents, and to officials of the Office of the Inspector General. Some of those lies came when McCabe was under oath.

What did he lie about? Unauthorized disclosures about the FBI’s investigation into the Clinton Foundation. The information was leaked to a reporter for The Wall Street Journal.

Remember, the only charge brought against Gen. Michael Flynn, the former national security adviser to President Donald Trump, was lying to the FBI, a felony. And Flynn wasn’t even under oath when he supposedly lied to the FBI.

Given that recent history, failure to prosecute McCabe would tell the American people that officers of the Justice Department and the FBI think they are above the law.

According to the inspector general’s report, “law enforcement sensitive information” appeared in an Oct. 30, 2016, Wall Street Journal article titled “FBI in Internal Feud Over Hillary Clinton Probe.” Until that time, the FBI had publicly refused to confirm that an investigation into the Clinton Foundation was underway.

Despite that official stance, the inspector general determined, McCabe told his special counsel and an assistant director in the FBI’s Office of Public Affairs that they could give information about the probe to Wall Street Journal reporter Devlin Barrett.

McCabe claims that the official called him and “expressed concerns about the FBI agents taking overt steps in the [Clinton Foundation] Investigation during the presidential campaign.” According to McCabe, he pushed back, asking, “Are you telling me to shut down a validly predicated investigation?”

McCabe told the inspector general the conversation was “very dramatic” and that he had never had a similar confrontation with a high-level Justice Department official “in his entire FBI career.”

The way The Wall Street Journal reported this was that a “senior Justice Department official” called McCabe “to voice his displeasure” that the FBI was “still openly pursuing the Clinton Foundation probe during the election season.” The “Justice Department official was ‘very pissed off,’ according to one person close to McCabe, and pressed him to explain why the FBI was still chasing a matter the department considered dormant.”

What spurred McCabe’s disclosure, according to the inspector general, was a prior Wall Street Journal story “that questioned McCabe’s impartiality in overseeing FBI investigations involving former Secretary of State Hillary Clinton.” This was due, according to that Oct. 23 story, to the fact that a PAC run by longtime Clinton friend and associate Gov. Terry McAuliffe, D-Va., had donated nearly $675,000 to the unsuccessful 2015 state Senate campaign of McCabe’s wife.

Friday’s report from the inspector general presents a series of findings. It concludes that McCabe lied when he told Comey that he had not authorized the disclosures to The Wall Street Journal and did not know who did. He repeated that lie when questioned by agents from the FBI’s Inspection Division and again when questioned by the Office of the Inspector General.

Only in a second round of questioning by the inspector general did McCabe finally acknowledge that “he had authorized the disclosure to [The Wall Street Journal].”

The inspector general notes that McCabe could have authorized the disclosure of the existence of the Clinton Foundation investigation if it were in the “public interest.” However, the report concludes, that was not his motivation.

Instead, it finds, McCabe violated FBI policy because the disclosure was “designed to advance his personal interest at the expense of department leadership.” Therefore, what he did “constituted misconduct.”

The inspector general cannot prosecute. All he can do is provide his office’s report to the FBI “for such action as it deems appropriate.” And so we wait to see what, if anything, is next.

Flynn was charged with lying to FBI agents about conversations with the Russian ambassador. Lying to a federal agent is a felony, even if—like Flynn—you are not under oath at the time. It is clear from the inspector general’s report that McCabe lied to federal agents multiple times, including while under oath.

Will he be prosecuted as Flynn was? It seems as if the FBI and the Justice Department have no choice—unless they believe that their colleagues are somehow above the law.

And if the Department of Justice no longer believes in the rule of law, the whole notion of America is turned on its head.