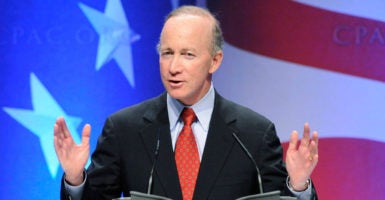 Purdue University President Mitch Daniels, the former governor of Indiana and director of President George W. Bush’s Office of Management and Budget, spoke exclusively to The Daily Signal’s Rob Bluey at the Reagan Institute Summit on Education on Thursday. Daniels explained how Purdue has been able to freeze its tuition for seven consecutive years and why free speech is flourishing on its campus in West Lafayette, Indiana. A transcript of his Daily Signal interview is below.

Bluey: We’re here at the Reagan Institute Summit on Education. What’s your message to the attendees at this event?

Mitch Daniels: I believe that higher education as we’ve known it is in some jeopardy. A lot of institutions, at least, are going to have difficulty persuading sufficient numbers of students and their families in the future that they’re providing value commensurate with the cost that they’re charging.

I also suggested that there are big opportunities that we need as a society to have addressed. Large numbers of people who could better themselves in life if they were to complete that degree that they started and didn’t finish, or maybe do one from scratch. We’re going to need new ways and means of reaching them, since many of them are well beyond the stage in life where they can engage in old-fashioned residential education.

Bluey: From a policy perspective, what are some reforms that you would like to see for higher education?

Daniels: Government’s not the answer to every question. It’s not the hammer for every nail.

There are just as many ways in which government involvement has been a contributor to this problem than it is its solution. Clearly, it could help if student financial aid programs were much less complex than they are today. If it would simply deregulate many of the requirements that have been piled on to schools. It’s part of the cost problem.

“Government’s not the answer to every question. It’s not the hammer for every nail.” —@purduemitch

We know that the explosion in federal grants and loans has contributed to driving up the costs. And I’m not saying that we shouldn’t have done it in the first place, only that it needs re-examination as to whether we’re really getting enough value out of it on net.

But this is a problem, mainly, for system to solve itself, or someone else will. Or the innovators, or so-called disruptors, will solve it for us.

Daniels: It’s simpler than some people imagine, really. It was simply establishing this as our priority and asking everybody in the community, Purdue family, to contribute to it.

We have a wonderfully diverse community at Purdue. Faculty, students, staff. We disagree about all sorts of things, but one thing that almost everybody agrees with is we want our university to be accessible to students, if they’re up to our standards, from whatever socio-economic background. And so, there’s been a lot of support for doing it.

“We disagree about all sorts of things, but one thing that almost everybody agrees with is we want our university to be accessible to students.” —@purduemitch

We’ve grown the student body, and that was part of it. We’ve affected some efficiencies and cost savings, but we can do … believe me, we’ve not done nearly what I think should.

By solving the equation for zero, as opposed to first deciding how much to spend and then dialing up the tuition to match, which was the old formula still practiced by some, we have not found it that difficult. It has turned into a selling point for our school.

We started out doing it because we thought it was right to do. As we’ve been able to extend it and extend it, it has turned out it was a reasonably prudent thing to do. And it’s now the next academic quality, the second most often mentioned reason that a student applies to or accepts admission to Purdue.

Bluey: What’s your message to other college and university presidents?

Daniels: I don’t preach. Thank goodness we have a very diverse system. All sorts of variety across it. Small, large, public, private. The whole spectrum.

I always decline the invitation to suggest that anything that we’ve done at Purdue University is necessarily for others. Except just to say that in support of the system, really, with affection for the network that we have had.

I mean, it has been the finest in the world. We want it to stay that way. But to do so, it’s going to have avoid denial, face up to the fact that we have not provided enough value, enough quality for the dollar we’ve charged, and be quick and nimble to make adjustments before disruptors of our sector do what they did to newspapers and big-box bookstores.

Bluey: Free speech on college campus has been a big issue, along with political correctness more broadly. What’s your experience been at Purdue? Is it as bad as it’s perceived to be?

Daniels: Not at our university, I’m happy to say. And I think it possibly, as a problem, has somewhat crested, and I hope it’s receding somewhat. The authoritarianism, the intolerance, the stifling of alternative viewpoints, the insistence on so-called diversity in every respect except diversity of viewpoint.

“You can’t serve the ultimate purpose of higher education if you don’t have a genuine free speech environment.” —@purduemitch

But as Purdue University, we have the gold star rating for free speech, and have for years. We were the first school to embrace what we like to call the Chicago principles. We thought they were so good when the University of Chicago enunciated them, our trustees simply adopted them.

I’m very happy to tell you that people who disagree strongly about other things, about many of these issues, on our campus at least, have really supported strongly the idea that you can’t have freedom of inquiry. You can’t serve the ultimate purpose of higher education if you don’t have a genuine free speech environment.

Our freshman students, in a couple of months, our incoming students, along with the rest of the orientation, will go to a program we created, which we have shared with other schools, which explains these principles and role plays them so that from the first class that they take at Purdue, students understand that here, we may sanction conduct, but never speech. And the answer to erroneous or offensive or intolerant speech is better speech.