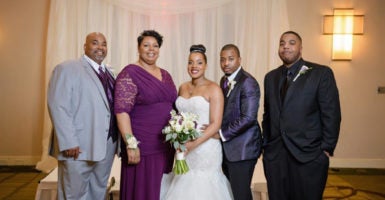 "You can’t withhold my right to own a firearm because somebody else committed a felony with a firearm,” says Mark Robinson, left, pictured with his wife Yolanda, daughter and son-in-law Kimberly and Danzeto Cephas, and son Dayson. (Photo courtesy Mark Robinson)

A North Carolina man who became an internet sensation by speaking at a city council meeting in support of gun rights says he was standing up for freedoms that the nation’s Founders died to give all Americans.

“Now, if those people could give their lives for those causes to give us the freedoms we have today, then we need to have the courage to give back,” Mark Robinson, a resident of Greensboro, North Carolina, told The Daily Signal in a phone interview.

Robinson, 49, not only lives in Greensboro, he was born and raised there. Because a video of his remarks went viral online, though, he is now known far and wide.

He spoke April 3 at a Greensboro City Council meeting called after Mayor Nancy Vaughan, a Democrat, suggested the city cancel a gun show set for August at city-owned Greensboro Coliseum in the wake of the deadly school shooting in Parkland, Florida, the Greensboro News & Record reported.

A 19-year-old former student with a rifle killed 17 and wounded 17 others in the Feb. 14 massacre at Marjory Stoneman Douglas High School.

“You can’t withhold my right to own a firearm because somebody else committed a felony with a firearm,” Robinson told The Daily Signal. “It’s not right. And like I said, it’s a lazy and unconstitutional way to enforce the law. So when I said [to the council and the audience] that we are the majority, that’s what I meant. We are the majority. The majority of people are law-abiding citizens, work hard every day, and their rights should be preserved.”

Robinson, who said he does not own a firearm, said even the suggestion of canceling a gun show that law-abiding citizens would want to attend troubled him.

“I do not own a gun currently, I am in the market for a firearm,” said Robinson, a member of the Army Reserve from 1985 to 1989. “I want to purchase a firearm, which is what piqued my interest about the gun show anyway.”

His said his friends recommended the event as the perfect place to buy a gun.

But, Robinson said, he would have been upset by the mayor’s proposal to cancel the gun show even if he hadn’t planned to shop there.

“I would have still been outraged by it, if I had no plans to buy a firearm. Because like I said … I have no plans to hire an attorney, [but] that doesn’t mean I want my right to counsel taken away. Those rights need to be preserved.”

Robinson and his wife, Yolanda, have been married for 28 years. They have a son, 26, and a daughter, 24, who recently got married and has her own 8-month-old son.

Robinson, who makes furniture, said he awoke to his conservative values over 30 years ago when a friend challenged him on something he said about a conservative commentator.

“I set out to prove him wrong, and ended up finding out, actually, that I was a conservative. I found out from this conservative commentator that I had more in common with than I thought,” Robinson said, adding:

Robinson credits his parents with planting the seeds that led to his conservative awakening.

“Fairness was something that was paramount in our household,” Robinson said. “I could say that it is partly due to the way I was raised, because … fairness is something that has always been instilled in me. And I think that the way that a lot of Americans are being treated right now, particularly on this issue of the Second Amendment, is just something that is not fair.”

His fellow Americans should not let fear keep them from speaking out and demanding that their constitutional rights be protected, Robinson said.

“My message would be, do not be afraid,” he said, adding: