5 Questions Emerging From the FBI Raid on Trump Lawyer 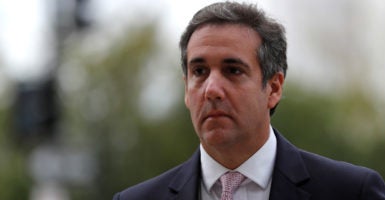 The FBI raid on the office and home of President Donald Trump’s personal attorney, Michael Cohen, raises constitutional concerns and issues about the future of key Justice Department officials, including the attorney general and the special counsel.

1. What was the FBI looking for?

FBI agents were reportedly seeking records from Cohen regarding payments he made to pornographic movie star Stormy Daniels and Playboy model Karen McDougal.

“There apparently is nothing to the Russia investigation, so now [special counsel] Robert Mueller has to go after this tawdry matter with Stormy Daniels that is way beyond his mandate,” Peter Flaherty, president of the National Legal and Policy Center, a conservative government watchdog group, told The Daily Signal.

The payment to Daniels could be construed as an illegal in-kind campaign contribution, some legal observers say, coming as it did shortly before the 2016 election.

“The attorney general made a terrible mistake when he did this, and when he recused himself,” @RealDonaldTrump says.

But a campaign finance violation would be an unusual reason for such a raid, Hans von Spakovsky, a senior legal fellow at The Heritage Foundation and former member of the Federal Election Commission, said.

“If it’s a federal election violation, it should be referred to the FEC,” von Spakovsky, also a former Justice Department lawyer, told The Daily Signal, adding:

It’s outrageous to raid the office of the attorney of the president. It’s rare that you go after a lawyer unless he is being recalcitrant and/or there is a fear he is destroying documents. There is no evidence that Mr. Cohen was doing that.

Deputy Attorney General Rod Rosenstein, the Justice Department’s No. 2 official, approved the referral from Mueller to the U.S. attorney for the Southern District of New York.

Attorney General Jeff Sessions recused himself from the special counsel’s probe of Russian meddling in the election because of his advisory role in the Trump campaign.

2. What does this mean for Mueller?

Rosenstein named Mueller, after Sessions recused himself, to investigate the Russia matter, possible collusion between Moscow and the Trump campaign.

“This has nothing to do with Russia collusion,” von Spakovsky said. “It looks like a sign that Mueller wants an independent Justice Department.”

Mueller referred information to the U.S. Attorney’s Office for the Southern District of New York. But the special counsel still instigated the matter and likely will work in cooperation with the New York federal prosecutors, Flaherty said.

“The investigation is out of control,” Flaherty said. “This is beyond political appearances. This is a constitutional crisis challenging the executive authority of the president. The president should do his duty and fire Mueller.”

This is a poor example for arguing overreach by the special counsel, contends Andrew McCarthy, a former assistant U.S. attorney and frequent critic of the Mueller probe.

“I don’t see what Mueller has done wrong here. He actually has limited himself in this case,” McCarthy told The Daily Signal.

“I think certainly that they are separate investigations, but I think that publicly they have been conflated quite a bit,” Sanders said.

The White House press secretary later said of the raid: “This doesn’t have anything to do with the president, and I would refer you to Michael Cohen and his attorney. When it comes to matters of the special counsel and dealings with the president, we’ve been fully cooperative.”

When asked, Sanders said the president “certainly believes he has the power to” fire Mueller.

3. What about attorney-client privilege?

Communications between an attorney and a client have broad protection, but it’s not absolute.

“The privilege applies to a lawyer and a client, no matter what,” von Spakovsky said. “If police are investigating a lawyer, it’s not a kick-down-the-door investigation to see what you can find.”

If, for example, a lawyer and client plotted payments that would violate campaign finance laws, that would be a crime for both parties, McCarthy said.

“A judge issued a warrant [in this case] because, on the basis of probable cause, a crime was committed,” he said.

4. What does this mean for Jeff Sessions’ future?

Trump was again critical of the attorney general Monday evening for recusing himself from the matter in the first place.

“The attorney general made a terrible mistake when he did this, and when he recused himself,” Trump said of Sessions at the White House before meeting with military leaders. “Or he should have certainly let us know if he was going to recuse himself, and we would have used a—put a different attorney general in. So, he made what I consider to be a very terrible mistake for the country.”

McCarthy initially opposed Sessions’ recusal primarily for its timing, asserting that at the time the Russia probe was a counterintelligence matter.

But, McCarthy said, a recusal would have been appropriate when matters close to the Trump campaign emerged, since Sessions was part of the campaign.

“As I said, recusal at that time was a mistake, but for the president to say Sessions should never recuse himself is ridiculous,” McCarthy said. “I’m not a critic of Sessions on this.”

McCarthy said he believes that if the investigation into the payments made by Cohen is related to the campaign, then Sessions’ recusal from this matter might also be relevant.

However, von Spakovsky said he thinks the probe of the Daniels-McDougal payments potentially could be separate from the recusal.

“He has obviously decided to keep himself out entirely,” von Spakovsky said of Sessions. “The responsibility for expanding this investigation should be with Rod Rosenstein.”

Sessions, a former Republican senator from Alabama, was at the White House on Tuesday as the president honored the NCAA football champions, the University of Alabama Crimson Tide.

But the attorney general declined to answer reporters’ questions about whether he spoke to Trump.

5. How long for this interim U.S. attorney?

Sessions isn’t the only one recusing himself.

Geoffrey Berman, the interim U.S. attorney for the Southern District of New York, recused himself from the decision on the FBI raid. Trump reportedly has planned to formally nominate Berman to the position.

Sessions appointed Berman and 16 other U.S. attorneys on an interim basis in January.

The Daily Signal asked Sanders on Tuesday whether the president still intends to nominate Berman to the U.S. attorney position beyond an interim basis. She responded that she had no personnel announcements.