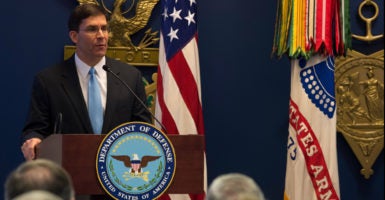 Prior to being sworn in as the 23rd secretary of the U.S. Army on Nov. 17, Mark Esper was the vice president for government relations at the Raytheon Co. He is also a former chief of staff of The Heritage Foundation. (Photo: Kathryn E. Holm/ZUMA Press/Newscom)

The secretary of the U.S. Army says that with increased funding, such as the $629 billion for defense in the spending bill signed by President Donald Trump on March 23, the military will be able to continue to grow and meet recurring threats.

“The future we face is increasingly uncertain. China and Russia, which have been identified as our strategic competitors, as part of this era of great competition … are modernizing. They are eroding our overmatch, and they are improving their ability to threaten our interests,” Mark Esper, secretary of the U.S. Army, said Thursday at an event at The Heritage Foundation.

Esper said the United States should expect its enemies, such as Russia and China, to rapidly increase their weapons stockpiles and technology, as well as a host of other variables.

“We also face the character of wars changing,” Esper said.

The challenges include the speed and brutality of U.S. enemies, threats in cyberspace and information warfare, and increased ground operations.

The goal, Esper said, is to be more mobile and be quicker than the enemy.

“The Army of 2028 will be ready to deploy, fight and win decisively against any adversary, any time, and anywhere in a joint, multidomain, high-intensity conflict, while simultaneously deterring others and maintaining its abilities to conduct irregular warfare,” he said.

However, Heritage’s 2018 Index of U.S. Military Strength rated the current military posture of the United States as marginal.

Prior to being sworn in as the 23rd secretary of the U.S. Army on Nov. 17, Esper was the vice president for government relations at the Raytheon Co. He is also a former chief of staff of The Heritage Foundation.

Thomas Spoehr, director for the Center for National Defense at The Heritage Foundation, told The Daily Signal in an email that “it’s a critical time for the Army, given the importance of their modernization plans.”

Spoehr, who moderated the event, added, “Many in Congress are closely watching the Army to see if they can get things right, especially their modernization programs, so it’s good Secretary Esper is out talking to audiences and the media.”