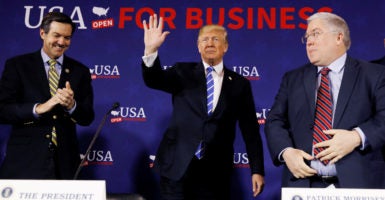 President Donald Trump prepares to speak about tax reform and other issues Thursday in White Sulphur Springs, West Virginia. Among those with the president at the event were Rep. Evan Jenkins, R-W.Va., and state Attorney General Patrick Morrisey. (Photo: Kevin Lamarque/Reuters/Newscom)

For Tony Hodge, a rural mail carrier from Hurricane, West Virginia, the Tax Cuts and Jobs Act meant a savings for his family of $2,417.

Hodge, on a stage with President Donald Trump and other elected officials and business owners, said he put the money to two uses. One, toward new countertops for his kitchen. And two, he put it toward doing his part to fight the opioid epidemic in his state.

“One of the most effective ways we deal with the opioid epidemic is through our faith-based initiatives,” Hodge said, addressing the president at the roundtable Thursday in White Sulphur Springs, West Virginia.

Because I’m getting a little bit of extra money in my paycheck, and my wife as well, we are able to give a little bit more to our churches, to ministries, and we use these ministries to fight this epidemic that is going on.

We are seeing them set free. When they are set free and released from the bondage of their addiction, they are becoming productive members of society. They are getting jobs. They are restoring families. They are finding self-worth and dignity through gainful employment because of the work of our charitable organization.

His wife, Jessica Hodge, cried on stage when she thanked Trump for tax cuts: “Thank you for listening to us, thank you for fighting for us.”

She said her 10-year-old son Hayden “wants to be president one day.”

Trump responded, “It will happen.”

Trump interacted with families and business owners for more than an hour, often remarking on how supportive the state had been for him.

Terry Dotson, CEO of Worldwide Equipment, a trucking company that employs 225 people with a full-service location in White Sulphur Springs, shared his story of how the tax reform legislation passed late last year affected him.

“Because of the tax cut and your administration and the changes that you’ve made in the energy business, we were able to give every employee a $300 bonus, we’ve been able to give more rapid raises. We’ve broken ground on two new facilities,” Dotson said. “Yesterday, we just announced the acquisition of another location where we employ people.”

Dotson went on to make a reference to House Minority Leader Nancy Pelosi, D-Calif., who called the bonuses and pay raises that resulted from the tax hikes “crumbs.”

At least 500 companies across the United States have announced pay raises, bonuses, 401(k) match increases, and utility rate cuts since the passing of the tax cut, according to data compiled by Americans for Tax Reform.

“We are very proud of the tax cut, a lot of people are being helped so much. So many things in there that we don’t even talk about,” Trump said during the event. “When you’re talking about tooling and trucking and all of the elements of investment you have to make, and now you have one-year expense. Who would have believed you would have had that. I think it’s going to be the greatest benefit in the whole bill.”

The one-year expensing provision allows companies to immediately write off the full cost of equipment they buy.

“Tremendous amounts of money is coming,” Trump said. “Basically, billions and billions of dollars are being brought from offshore where big companies, small companies, they had money trapped outside of our country. They couldn’t get it in. I think it’s going to end up being $4 trillion will come back in.”

Others at the roundtable were West Virginia Gov. Jim Justice, Sen. Shelley Moore Capito, and state Attorney General Patrick Morrisey, all Republicans who had high praise for Trump beyond the tax cuts, and talked about energy deregulation in a state that is heavily reliant on the coal industry.

Others at the table were representatives of two Elkins, West Virginia, banks: Citizens Bank of West Virginia, which gave $1,000 bonuses to its 66 employees, and Davis Trust Company, which instituted 3 percent pay increases for its 45 full-time and two part-time workers.

Other participants in the roundtable discussion were the Lilly family of Ghent, West Virginia, who saved $3,563 because of the tax cuts law; and the Farrell family of Huntington, West Virginia, who opened a 529 college savings account in March, which allows them to use up to $10,000 on primary and secondary education.

The tax cuts are strong for four reasons, said Grover Norquist, president of Americans for Tax Reform. First, the benefit for businesses that will reinvest; secondly, 90 percent of Americans are getting more take-home pay; and third, the stock market is up more than it was before the tax cuts and that means more retirement savings. Finally, utility rates are going down for many Americans.

“The success of the tax cuts is good, permanent, and useful,” Norquist told The Daily Signal.

However, Norquist cautioned that talk of tariffs could scale back some of the progress.

“The challenge with tariffs is that they raise the price on goods for the American people,” Norquist said. He added, “We’ve been growing at 3 percent. I don’t think we’ll go back to 2 percent, but growth could slow.”