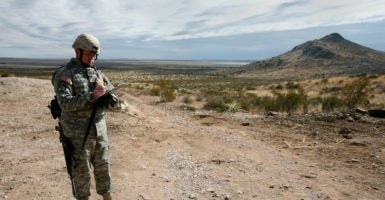 President Donald Trump once again caught all of the pundit universe by surprise.

He was faced with a challenge to his tough border control position from the activist group People Without Borders and its caravan of 1,200 to 1,500 migrants determined to prove sovereign boundaries between nations don’t count, and should therefore be ignored.

The proposal by Trump to deploy the military on the U.S.-Mexican border has raised many questions. We asked Heritage Foundation visiting fellow Steve Bucci what he thinks of the idea.

Q: What do you think of President Trump’s approach to the current crisis regarding the so-called “caravan”?

He took a two-pronged approach.  He worked with the Mexican government to get them to help stop the group’s movement north, and then announced he would use our military to secure the border.

The first part went perfectly. The Mexicans, recognizing their sovereignty was being trampled also, and not wanting a huge dust-up on the U.S.-Mexican border, acted swiftly and correctly. Score one for the Trump administration’s hemispheric diplomacy and U.S.-Mexican cooperation.

The second part has set off an enormous amount of hand-wringing, finger-wagging, and, sadly, not nearly enough conscious analysis.

Q: Is this the first time a president has sent troops to the border?

No. Both George W. Bush and Barack Obama did so.

These forces were in Title 32 status, meaning they were under the control of the governors of the border states, but funded by the feds.

In that status, they can have broad powers (including law enforcement) without breaching the Posse Comitatus Act. (That is the law that prohibits the federal military—active duty and National Guard who have been fully federalized, both funded and commanded by federal authorities—from conducting law enforcement activities domestically.)

A policy decision was made to not use them that way, but instead to maximize their abilities to “free up” the Border Patrol to enforce our laws. The Guardsmen did admin, logistics, engineering, intelligence, surveillance, and transport. In the two years, which cost about $1.2 billion, the Border Patrol was able to cut crossings tremendously and grow its own manpower to a more functional level.

Obama did a similar emergency surge deployment, albeit much smaller and shorter (1,200-plus personnel for about a year).

Q: It seems like we do not know enough of the details to know what exactly the White House is proposing. Therefore, is this early criticism unfounded?

I agree that worries should be muted a bit. Trump has not yet said how many troops will be deployed, or been specific with what they will do, or how long they will stay, except for the general statement that they will stay until the wall is built.

All that leaves things very wide open. What he has proposed is not an illegal use of the military, and is not at all unprecedented.

It remains to be seen if it is good policy or will be effective. Before condemning it, we need to determine what “it” is.

Q: So, you think it is possible to effectively use the military to help secure the U.S. border?

If the president and his advisers (Secretary of Defense James Mattis, Homeland Security Secretary Kirstjen Nielsen, and the border state governors) propose a reasonable set of parameters, this may in fact be a good move.

It could also go badly if they overreach. The suddenness of the announcement is a little disconcerting, but like it or not, that is Trump’s style.

It is very likely that the departments of Defense and Homeland Security will look to the previous operations as models to scope their plans now. That sort of reasonable and measured use of the National Guard is not just the most likely answer, but one with which most folks could live.

It keeps the folks in military uniforms out of the vast majority of direct contact with the attempted lawbreakers, and has them doing tasks for which they are trained and organized.

Q: You mentioned that both Bush and Obama used the military on the border in the past. Are there any major differences from the situation today?

Today, the crisis is less well-defined, although People Without Borders has promised continued marches with the intent of “busting” our border.

There is also a steady stream of illegal alien crossings estimated at 1,000 a day. Not the huge numbers of the earlier periods, but not a trickle either.

While we hope the Mexican government will continue to be a constructive partner as they were in the present incident, that could change. Preparing for a bad turn of events is not unreasonable.

Another difference is that during Operation Jump Start, the Bush-era operation, we had much lower levels of Border Patrol agents and much less infrastructure/tech. The force-multiplier effect then was larger than we could expect today.

Combined with the fewer border crossings than in 2006, the bang for your buck would be lower today.

Additionally, the military today is significantly underfunded and has been for years. Funding the entire thing with Defense Department money will be a serious drain on a budget that got its first chance at health only recently.

If the operation drags on too long, this could be a detriment to our overall national defense.

Q: So, I guess it is safe to say you are cautiously optimistic about using the military to secure the border?

The bottom line is this: Trump is right to do something.

He is well within his authority to secure the border with the military, and if so, the National Guard is a very reasonable tool to use. But without the details, we must ask for more information.

The size, the duration, and the mandate/rules of engagement of the forces are critical, as yet unknowns.

Hopefully, the Trump administration will make those calls expeditiously, transparently, and wisely. Until that time, we should be supportive, but watchful.