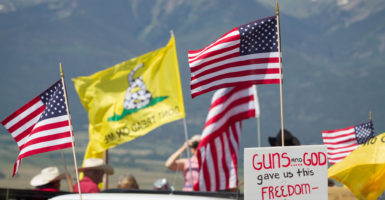 The rally by students in Woodland Park, Colorado, in support of the Second Amendment comes nearly five years after this Colorado rally for gun rights on Independence Day 2013. (Photo: Greg Smith/ZUMA Press/Newscom)

Students at a Colorado high school on Wednesday demonstrated their support for the Second Amendment by conducting a walkout to counter the pro-gun control narrative.

Zachary Schneider, a student at Woodland Park High School in Colorado, said he participated in the event to demonstrate that not all students are in favor of stricter gun control laws.

“It’s all over the news right now that all students hate guns,” Schneider told KXRM-TV, the Fox broadcast network affiliate in Colorado Springs, Colorado. “I wanted to show that not all students feel that way.”

Following the March for Our Lives rally March 24 in Washington, D.C., that featured pro-gun control high school students and survivors of the shooting at a Parkland, Florida, high school that left 17 dead, the Colorado students felt they needed to show the media that there are students who support Second Amendment rights to gun ownership.

“I don’t believe that guns are the problem,” Haley Armstead said, another student at Woodland Park, Fox News reports. Armstead said she thinks the problem is bad people, not guns, which she described as “inanimate object[s].”

Christian Garcia, one of the student organizers, told KXRM-TV, why he thinks it’s important to hold events in favor of Second Amendment rights.

“If we have more armed officers or some type of security at our school and teachers train more, that will honestly stop or prevent school shootings a lot more,” Garcia said.

The high school allotted 30 minutes for students to hold their demonstration, although the event was not sponsored by, or affiliated with, the school. The walkout included a moment of silence for the victims of school shootings.

The rally at Woodland Park comes just short of a week after students held a similar rally in Rockledge, Florida, on March 30.

“I’m pro-Second Amendment. I wouldn’t mind deeper background checks, of course, but the Second Amendment will not be infringed upon,” protest organizer Anna Delaney, a junior at Rockledge High School, told WFTV, the ABC affiliate in Orlando, Florida.