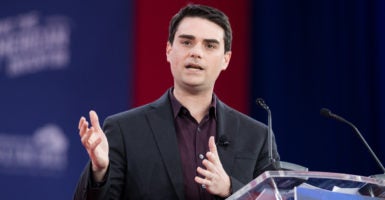 Ben Shapiro said on his podcast Wednesday that if the YouTube shooter was an NRA activist, there would be nonstop coverage. (Photo: Michael Brochstein/Sipa USA/Newscom)

Many in the media will ignore the Tuesday shooting at YouTube headquarters in San Bruno, California, because the facts of the situation don’t support their narrative, conservative commentator Ben Shapiro says.

“Since this person is a weird person with a mental illness and left-wing leanings and a Muslim background, that means this is not going to be news beyond, you know, the next five minutes,” he added.

What made the shooter “weird,” Shapiro described, was her YouTube videos, where she depicted animal cruelty in order to further her animal rights agenda, and her rants against YouTube and its censorship of her videos resulting in a loss of income.

“This isn’t going to be top-line news for the media for much longer than 24 hours. It would’ve been top-line news if this had been an NRA activist,” Shapiro said on his podcast Wednesday.

Shapiro drew similarities between the YouTube shooting and the shooting in Parkland, Florida. Law enforcement was aware of both shooters before they acted out their crimes. But the Parkland shooting conforms with the left-wing media’s narrative, so they will choose to focus on that, he argued.

“The media is going to bury this one. We’ll get right back to Parkland, which has a nice narrative that the media can glob onto, ignoring, of course, all the facts about what happened in Parkland.”

In the Feb. 14 shooting at a high school in Parkland, Florida, authorities were notified about the shooter’s disturbing behavior.