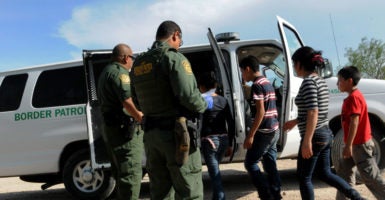 Under current law, child migrants who are not from a neighboring country receive the same protection as victims of human trafficking. (Photo: Paul Hennessy/Polaris/Newscom)

In the midst of Congress’ ongoing division over immigration reform, the White House confirmed Tuesday that it is developing another immigration package to be sent to Capitol Hill.

One key component of this package involves closing a loophole included in the William Wilberforce Trafficking Victims Protection Reauthorization Act.

Passed in 2008 and named after the great English abolitionist, this law requires that any unaccompanied alien minor from a non-neighboring country (i.e. any nation other than Mexico and Canada) be granted the same protection as a victim of human trafficking upon apprehension.

Once granted these protections, the unaccompanied minors are handed over to the Department of Health and Human Services and generally released into the U.S., making them much harder to deport. This has led to thousands of unaccompanied children—largely from Central America—being allowed to stay in the U.S. rather than being returned to their families in their home countries.

The Heritage Foundation has long advocated the closing of this loophole.

One reason for this is that, while many of the unaccompanied minors come from dire situations, being smuggled into the U.S. is not the same as being forcibly trafficked. In most cases, the families of these children have paid for smugglers to bring their children to the U.S.

By treating these minors all as victims of trafficking, Health and Human Services is less able to devote time and resources to actual victims of human trafficking.

Additionally, because the loophole results in low deportation rates, parents in Central America have an incentive to send their children to the U.S. This puts thousands of children in the hands of smugglers, endangering the children and padding the pockets of dangerous criminals.

Children from Central America should not be treated any differently than children from Mexico. Only children with credible claims of being trafficked, regardless of nationality, should get appropriate protections.

To tackle these problems, Congress should reform the William Wilberforce Trafficking Victims Protection Reauthorization Act so as to close the loophole that applies to unaccompanied minors from non-neighboring countries. This would allow the U.S. to enter into agreements with other countries to more rapidly return unaccompanied alien children, while maintaining key protections for the safety of trafficked children.