There Is No Solid Evidence of Genetic Basis for Trans Identity 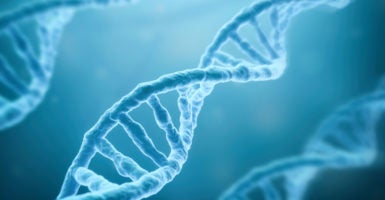 A recent study exploring whether genes may play a role in transgender identity was inconclusive, despite some media suggestions to the contrary. (Photo: Altayb/Getty Images)

A new study into the genes of those who identify as transgender has picked up decent amount of media attention.

The Times in the United Kingdom hailed what it called a genetic “discovery” with the headline “Science pinpoints DNA behind gender identity.” LGBTQ Nation ran a more inconclusive headline: “Scientists discover DNA that could be responsible for gender identity.”

The Times should have paid more attention to Dr. John Theisen, the lead researcher, who said the genes they identified pointed to a “possibility, not a fact.” He cautioned that his research, still in its early stages, used only a small sample size (30 people) and has yet to be peer reviewed—both reasons for exercising major caution when interpreting the results.

In fact, closer examination of the abstract from the research paper reveals that finding a genetic basis for transgender identity wasn’t even the intended purpose of the study. The purpose was much narrower in scope: to identify genes that might point to a potential biological basis so future research could know where to focus its efforts.

In the conclusion, the researchers say, “We identified genetic variants in 20 genes that may play a role in transgender identity.” Words are important, and the word “may” indicates a possibility, not a fact.

Another much larger study is being conducted to explore whether transgender identity has any biological basis. That study, which includes 10,000 participants, is looking to the genome—a person’s complete set of DNA—for clues about whether transgender identity has a biological basis. The findings are years away, though, and completion of the project depends on securing more funding.

In the meantime, no absolute conclusions can be made about a genetic basis for transgender identity.

Some of the difficulty in fashioning a study to find a biological link to transgender identities arises from the definition of the term “transgender.” Medically speaking, a transgender person is defined as someone who has been diagnosed with gender dysphoria, a condition where a person experiences discomfort or distress arising from a mismatch between their biological sex and internal sense of gender identity.

The problem is that transgender identity is based solely on subjective criteria. There is no objective, robust physical test to prove whether “transgender persons” exist beyond a person strongly insisting that he or she is a transgender person.

It’s difficult to even discern who truly has gender dysphoria. Those who self-identify as “transgender” represent a challenging cross-section of individuals. They may be simple cross-dressers, transvestites, or drag queens, yet they may or may not have gender dysphoria.

Many transgender persons are suffering emotionally, psychologically, or psychiatrically, sometimes due to early childhood trauma or co-existing mental disorders. Studies have shown that nearly 70 percent of people diagnosed with gender dysphoria also suffer from a wide variety of co-existing disorders that often go undiagnosed and untreated.

With no medical proof to help diagnose gender dysphoria, and with most who identify as transgender having other issues that need treatment, one could argue that too many people are being gathered under the blanket term “transgender” and being inappropriately directed toward cross-gender hormone therapies and surgeries.

As a young person, I was correctly diagnosed with gender dysphoria and then approved for hormones and surgery by Dr. Paul Walker, the original author of the “Harry Benjamin International Standards of Care.” The treatment was not effective.

I discovered firsthand that society wasn’t the cause of transgender suicide and suicide attempts. The cause was an unfulfilled expectation that cross-gender hormones and surgery would effectively resolve gender distress.

I remain open to the possibility that a biological predisposition to transgender identities may be found. Whether it is found or not, my hope is that today’s barbaric, mutilating gender-change procedures will be replaced by an effective treatment that eliminates the high rate of suicide ideation and brings long-lasting relief to those with gender dysphoria.