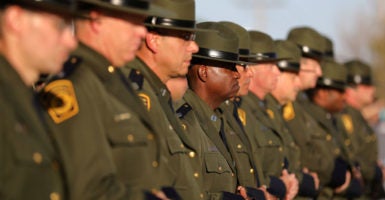 The following is adapted from a speech Sen. Ted Cruz, R-Texas, delivered on April 3 at the National Border Patrol Council in Edinburg, Texas, and has been edited for length.

Growing up, my dad would tell me stories about the legends of Texas history. I’d dream of fighting alongside Col. William Travis, Jim Bowie, and Davy Crockett at the Alamo, or conquering the Wild West.

In the last five years I’ve served in the Senate, I have been incredibly privileged each and every day to encounter heroes every bit as glorious as those we looked up to as children.

They’re farmers, ranchers, and small business owners. They’re first responders and law enforcement, and members of the military—all of whom rush toward danger instead of away from it.

And they’re the brave men and women of the Border Patrol, who go out every day in dangerous territory, risking their lives to protect the safety and security of our communities, of our families, of our homes.

One such man was Border Patrol Agent Javier Vega Jr., known as “Harvey” by his friends and family. On Aug. 3, 2014, Harvey was enjoying family time with his wife, Andrea; his sons, Jiovanni and Jarod; and his parents, Javier Sr. and Marie.

They were fishing in one of their favorite spots, an isolated area in Willacy County about 35 miles north of the U.S.-Mexico border.

As they were enjoying their day, two men (who were later identified as criminal illegal aliens) approached the family and attempted to rob them, subsequently opening fire on the family. Harvey was shot and killed during the commission of this criminal act while attempting to protect his family from these two criminals, who had both been previously deported several times.

Javier Sr. was also hit during the shootout, and is still recovering to this day.

Harvey lost his life doing what he had been doing all his life: protecting others. As a former Marine, Harvey was drawn to the Border Patrol out of a sense of duty and patriotism.

Harvey has since been recognized and memorialized in the National Peace Officers Memorial and the Customs and Border Patrol Valor Memorial, and this coming May he’ll be honored in the Texas Peace Officers’ Memorial.

We salute the bravery, the heroism, and the sacrifice of heroes like Javier Vega.

Agents Remigio Guerra III and Anthony Anderson are both recipients of the prestigious Newton-Azrak Award, the Border Patrol’s highest award for bravery. Both agents are from the Laredo South Station.

They received this award for actions that resulted in the rescue of four illegal aliens from the Rio Grand River. Anderson risked his life by jumping into the river and pulling the subjects onto dry land, with the assistance of Guerra.

The Newton-Azrak Award, in turn, is named after Patrol Inspectors Theodore L. Newton Jr. and George F. Azrak, who were killed in the line of duty after they were ambushed, overtaken, kidnapped, and executed by drug smugglers. The death of those heroes prompted the inception of the Newton-Azrak Award, and it is particularly significant that this award has been given to two agents who saved lives, at the risk of their own.

And then there’s our friend, union President Paul Perez.

Thankfully, Hurricane Harvey didn’t hit the valley. But like any Texan, Paul doesn’t view his sphere and responsibility as limited to the immediate community in which he lives.

He stepped forward and helped lead relief efforts, to bring Border Patrol agents to help those in Hurricane Harvey. Boats and jet skis and agents went up to Houston to help rescue people in high-water rescue situations, because suddenly we had the Rio Grande in downtown Houston.

Over 2,000 man hours and hundreds of thousands of dollars of goods were donated by Border Patrol agents. The agents donated water, food, hygiene products, and medical supplies to the cities of Refugio and Port Aransas. The donated goods were transported from the union’s office in Edinburg in one 18-wheeler, seven U-Haul trucks, and two flatbed trailers.

Paul didn’t sit around and say, “Gosh, that’s really terrible what’s happening up there, sure hope somebody does something about it.” That’s not Texas. In Texas, when you see a need, you step forward and solve it.

Right now, there’s a great debate about the direction this country should go. It’s about different visions, different sets of ideas.

There are some in Washington who believe our immigration laws shouldn’t be enforced, and that our borders should be open; that our cities should be sanctuaries for those who come to break the law; who believe the Constitution and the Bill of Rights are mere “rough drafts,” not deserving of protection.

But that’s not Texas.

The sense of duty to our fellow Americans, respect for the laws of the land, and boundless spirit of self-sacrifice shown by the heroic men and women of the Border Patrol is who we are.