Donations to NRA Triple Amid Demands for Stricter Gun Control 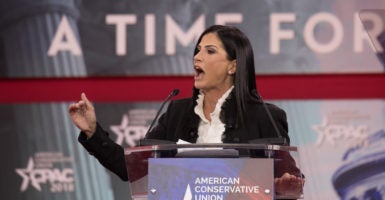 After a 19-year-old with an AR 15-style rifle took 17 lives Feb. 14 at a high school in Parkland, Florida, some Americans demanded more restrictions on gun ownership.

A retired Supreme Court justice, John Paul Stevens, used a New York Times op-ed March 27 to become perhaps the most prominent liberal to date to call for repealing the Second Amendment, which guarantees an individual’s right to bear arms.

The NRA responded to Stevens’ proposal, saying: “The men and women of the National Rifle Association, along with the majority of the American people and the Supreme Court, believe in the Second Amendment right to self-protection, and we will unapologetically continue to fight to protect this fundamental freedom.”

The NRA’s political action committee, the NRA Political Victory Fund, took in more than $779,000 in individual contributions in February, up from almost $248,000 in January, according to its most recent filing with the Federal Election Commission.

The Center for Responsive Politics, a nonpartisan organization that tracks political spending, said the number of contributors to the NRA in the two weeks after the Parkland shooting more than quadrupled from the two weeks before.

The PAC collected $93,963.04 in February, or double the previous month, in itemized contributions, which are donations of $200 or more from individuals.

Donations of $200 or more are required by law to be itemized and disclosed, including the donor’s name, occupation, employer, and ZIP code.

About 88 percent of donations to the NRA’s PAC in February came from unitemized contributions—individuals giving $200 or less.

The NRA increased spending on ads on Facebook and YouTube from $11,300 per day on average in the 24 days before the Parkland shooting to $47,300 a day in the next 24 days, the Chicago Tribune reported.

The Second Amendment Foundation, a nonprofit based in Washington state that supports gun rights, said it saw a “2,500 percent” increase in registration and support from 18- to 20-year-olds since the Florida mass murder, but the organization would not provide specific figures to The Daily Signal.

The increase in support occurred through “organic” internet searches, not through outreach efforts such as ads, the organization’s founder said.

“We normally don’t get that many members or donors in that age group,” Executive Vice President Alan M. Gottlieb said, “since the gun-rights movement typically trends toward older Americans.”

Gottlieb said his organization never “specifically targeted” 18- to 20-year-olds, but added that it is “obviously alarmed” about politicians seeking to restrict gun rights.

“SAF did nothing special to make [the increase in interest] happen,” he said. “They have really done this on their own, finding us on the internet and following up.”