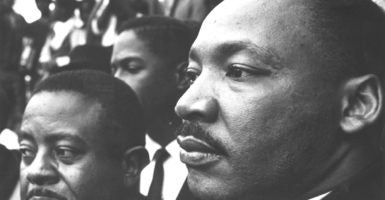 “He was a human with faults … but loved a perfect God," Alveda King says of her uncle, Martin Luther King Jr., pictured here in March 1965 with friend Ralph Abernathy, also a leader of the Southern Christian Leadership Conference. MLK was assassinated 50 years ago, on April 4, 1968. (Photo: Flip Schulke BlackStar Photos/Newscom)

Longtime pro-life activist Alveda King, a niece of Martin Luther King Jr., spoke recently with The Daily Signal about her uncle’s legacy in advancing civil rights for black Americans as the nation marks the 50th anniversary of his assassination April 4.

Alveda King, 67, is the first of five children of King’s younger brother, A.D. King, who like her “Uncle M.L.” was a Baptist minister and civil rights activist and often was at his side.

A former Georgia state lawmaker, she currently directs the group Civil Rights for the Unborn, a division of Priests for Life. These questions and answers have been edited for clarity and length.

Rachel del Guidice: You were 16 or 17 when your uncle was fatally shot in Memphis. What do you remember about where you were, how you heard the terrible news, and what happened in the immediate aftermath?

Alveda King: I was 17 and in Louisville, Kentucky. Daddy was a pastor there. I got married the next year; my dad walked me down the aisle. In 1968, I was, a junior, maybe a senior, but I was getting ready to go to the ROTC Ball. So I was at the dressmaker’s, getting a periwinkle blue ball gown made.

And I was so excited, it was pretty. … And the television was on, a black-and-white little TV. And it says, “Martin Luther King Jr. has been shot.” So I looked at [the dressmaker], she looked at me; we just kinda dropped everything and I said, “I gotta go, I gotta go, get me out of this dress.”

So [I] rush, get in the car, go home. … By then, my dad had gotten home [from Memphis], and he was saying, “Look, I gotta get to Atlanta, get Coretta [Coretta Scott King, MLK’s widow], we have to go get the body,” and all of this.

I was like, “Oh my God, Daddy, white people killed Uncle M.L.”

I remember him wrapping his arms around me, and he just rocked me for awhile. And even in the midst of his grief, he went on. Of course, Uncle M.L. was gone, and after that … my dad was killed 15 months later [found drowned at age 38 in his swimming pool]. There’s a new film out about my dad now, “Unsolved History: Life of a King.”

Del Guidice: What do you think the country has learned from your uncle’s example as it marks the 50th anniversary of his assassination?

Acts 17:26 says, “Of one blood God made all people, to live together on the face of the earth.” So we can be brothers and sisters because we are one blood; we are the human race. And I believe if my uncle were here today, he’d like for us to consider ourselves as human beings, not different races. One race, not colorblind.

If you’re colorblind, you need to go to the doctor or get surgery or get some glasses or something. But we are in living color, and we can learn to love each other as brothers and sisters.

Del Guidice: What particular issues or trends in American society do you think your uncle would be troubled by, and why?

King: Well, [for example], the beautiful march that the young people had, the March for Our Lives. I believe he would say, “In your effort to [assert] that it is guns that kill people, [know that] it is the human heart that has to be transformed; because people cannot only shoot, they can use guns and knives or poison, or use this or use that.”

I believe he would accept my request that we remember the unborn babies. Just like the school students who have been victims of violence, remember the ones in the womb as well. And so, I think he would encourage youth, because youth were always a major part of the movement in his day.

I was a young youth organizer, I went to jail, marched. Daddy’s house was bombed in ’63, Uncle M.L.’s was bombed over in Montgomery [Alabama] in the ’50s. Young people did a lot of marching and protesting, but we were encouraged to pray and to love.

Del Guidice: Where do you think society has strayed from MLK’s vision or legacy, perhaps by putting words in his mouth or misconstruing his message?

King: You have to go by his real words. He’s always quoting the Bible: “Let righteousness roll down as water, and justice as a mighty stream.”

I have a song; as a matter of fact, today I’m in the studio working on it. I wrote it 45 years ago, after his death and all that. It is called, “Let Freedom Ring,” and has the lyric “I thank God that King had a dream.”

Del Guidice: Is it possible for someone to build a nonviolent movement through civil discourse the way your uncle, your father, and others did in the 1950s and 1960s?

So if we follow the pattern established by Martin Luther King Jr. as a leader—to pray, to trust God, to commit ourselves to God—as we get out there on that trail of taking the knee or praying and protesting, then I believe that God will again hear us, according to 2 Chronicles 7:14, and heal our land.