Another Reason to Remember the Easter and Passover Weekend 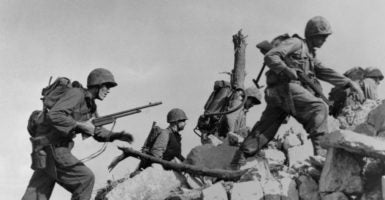 As we celebrate Easter Sunday and the Jewish Passover, we should keep in our prayers and remembrances the many Americans who fought and sacrificed during that same time 73 years ago in the Battle of Okinawa.

The event was Operation Iceberg. It was the bloodiest battle and the largest amphibious assault in the Pacific Theater of World War II.

On Easter Sunday, April 1, 1945, the Navy’s Fifth Fleet under Adm. Raymond Spruance attacked the Japanese-held island. They were joined by a British, Canadian, New Zealand, and Australian naval task force and more than 180,000 Army soldiers and Marines. This was the final push toward invading mainland Japan and putting an end to the war.

Military planners considered the capture of Okinawa and its airfields to be a crucial and necessary precondition for the invasion of the Japanese mainland.

Were the U.S. to invade Japan, estimates of potential American casualties were upward of 1.7 to 4 million, with between 400,000 and 800,000 deaths. The Battle of Okinawa only served to raise those estimates, as had the recent brutal battle for Iwo Jima, where U.S. casualties numbered 26,000 over five weeks of fighting. Only a few hundred Japanese had been captured out of the 21,000 troops who fought to the death.

Those expected casualties were the major reason for President Harry Truman’s decision to use the atomic bomb.

The Japanese military knew that Okinawa was its last stand in the Pacific. As a result, it fixed 77,000 troops on the island under the command of Lt. Gen. Mitsuru Ushijima, along with a 20,000-strong Okinawan militia. The Japanese forces even included 1,800 middle school boys conscripted into the “Blood and Iron Corps.”

The American invasion started with a massive seven-day naval bombardment of the landing beaches, where heavy resistance from the Japanese forces was expected. That prelanding bombardment included tens of thousands of artillery shells, rockets, mortar shells, and napalm attacks.

The Japanese allowed American troops to land unopposed on Easter Sunday and to move inland with nominal resistance. Japanese troops had been ordered not to fire on the American landing because Ushijima wanted to lure the American forces into a trap he had laid for them in what became known as the Naha-Shuri-Yonabaru Defense Line in southern Okinawa, a rugged terrain riddled with fortified pillboxes, gun emplacements, tunnels, and caves.

The Japanese also sent the battleship Yamato on a one-way suicide mission to Okinawa, but it was spotted by Allied submarines and sunk (along with a cruiser and four enemy destroyers) by American pilots, downing nearly the entire crew of over 2,300.

The far more dangerous attacks on the Allied fleet were by dense waves of suicide kamikazes diving their planes into ships. The Fifth Fleet lost 36 ships in the Battle of Okinawa and suffered damage to another 368 ships. Almost 5,000 U.S. sailors and pilots were killed and almost as many were wounded, with over 700 Allied planes being shot down. It was the biggest naval loss of the war.

On Okinawa, Americans fought ferocious battles on almost every defended hilltop. Torrential rains turned the island into a sea of mud that bogged down tanks, trucks, and other heavy equipment.

The most infamous hilltop was Hacksaw Ridge, a 400-foot cliff on the Maeda Escarpment that was depicted in a 2016 movie about Cpl. Desmond T. Doss. Doss was a Seventh-Day Adventist and conscientious objector who became a combat medic. He was awarded the Medal of Honor for rescuing 75 wounded soldiers at Hacksaw Ridge.

In almost every fight on Okinawa, American troops fought for every foot of ground in hand-to-hand combat against fanatical Japanese troops who often took their own lives rather than surrendering. That eventually included Ushijima and his chief of staff who committed seppuku on June 22. It was Ushijima who had ordered his troops to “fight to the death.”

With his suicide, the Battle of Okinawa was effectively over.

The Battle of Okinawa was the deadliest fight of the Pacific island campaign. The Japanese knew they could not win. Their purpose was simply to make the battle as costly as possible to the Americans and to hold them off as long as possible, allowing Japan to prepare for the defense of their home islands. Thus, Japanese commanders considered all their forces and the residents of Okinawa totally expendable.

Americans incurred almost 50,000 casualties on Okinawa, including over 12,000 dead. Those killed  included the American commander, Lt. Gen. Simon Bolivar Buckner, who was killed by enemy artillery fire just four days before the battle ended, making him the highest-ranking U.S. officer killed during the entire war.

Ernie Pyle, the famous war correspondent, was also killed when he was shot by a sniper on a small island northwest of Okinawa. In addition to Doss, six other Americans who fought in the battle received the Medal of Honor, our nation’s highest award for bravery under fire.

But the Japanese losses were much greater. Only 7,400 Japanese soldiers survived—90 percent of Japanese troops on the island fought to the death. Almost 150,000 Okinawan civilians were killed, amounting to one-third of the prewar population. Many were used as human shields by Japanese troops. Others threw themselves and their families off cliffs on the southern part of Okinawa in mass suicides after the Japanese convinced them that the Americans would kill or rape anyone they captured.

Ironically enough, it was Japanese troops who engaged in mass rapes of Okinawan women during the battle.

The bloody, ferocious battle for Okinawa lasted 82 days and left the island a “vast field of mud, lead, decay, and maggots” according to Ted Tsukiyama’s “Battle of Okinawa.” Almost every building on the island was destroyed.

Truman’s decision to bomb Hiroshima and Nagasaki in August ended the war and all Japanese resistance, thereby preventing the enormous American casualties that would have resulted from a land invasion of Japan.

On Easter Sunday, American Christians will celebrate the resurrection of Jesus Christ, which marks the triumph of good over evil, sin, and death. At the same time during Passover, Jewish Americans will celebrate their liberation from slavery in ancient Egypt. Those celebrations are profound and deeply significant.

But we should also pause to remember the Americans and their allies who, 73 years ago, fought and died during Easter and Passover to preserve our freedom and end a brutal war started by a ruthless military dictatorship intent on enslaving the people it conquered.

We and the world owe them more than we can ever repay.