What Makes Israel Such a Valuable Partner 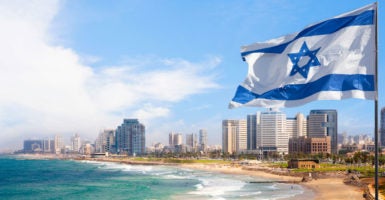 Israel, a nation of just 8 million people, has become a renowned global leader in a range of industries. (Photo: stellalevi/Getty Images)

Israel is known as the innovation nation, and with very good reason.

As a country merely the size of New Jersey and with no real natural resources to speak of, Israel still has the third-most companies listed on the Nasdaq Stock Market, trailing only the much larger United States and China.

This tiny nation of just 8 million people has, through its own boldness and entrepreneurial spirit, become a renowned global leader in industries ranging from high technology to agriculture to manufacturing to tourism.

The nation’s continued success in recent years can be at least partially credited to the incredible leadership of Israeli Prime Minister Benjamin Netanyahu.

Netanyahu is an orator of the highest order—an extraordinary communicator. The prime minister’s talents were on full display for all to see at the American Israel Public Affairs Committee Policy Conference, which took place recently in my beloved Washington, D.C.

Before delivering a moving speech on policy, Netanyahu first dove into an impromptu discussion of the Jewish state’s unique ability to lead on a global scale, highlighting the country’s remarkable gains in recent years and its impressive economic standing.

For 15 minutes and without any notes, the prime minister paced the front of the stage at the packed Washington Convention Center where 18,000 pro-Israel activists sat with undivided attention while he delivered a cogent and memorable presentation on the innovative spirit that is just one aspect of what makes Israel so incredible.

Israel’s true power, Netanyahu underscored, is not in its natural resources, but rather in its “human resources.” He provided tangible, real-world examples of this phenomenon by citing a number of innovative Israeli companies that have been recently acquired by giants of industry in leading business hubs like Silicon Valley and beyond.

He pointed to cutting-edge Israeli institutions such as the Volcani Institute, which produces a staggering 75 percent of all agricultural innovation.

I can personally attest to his glowing description. I have been to Israel over a dozen times and have had the opportunity to see the remarkable country and its innovation at work firsthand. I can tell you from these experiences and from my conversations with the country’s leaders that Israel offers an immense strategic value to the United States as a key partner and friend in diplomacy.

The economies of our two countries are intrinsically linked, and this provides both our nations with immeasurable benefits and advantages. This value is underscored by the fact that some of the biggest and best companies in the United States, including Google and Intel, chose to build their research and development facilities in Israel, because the country has no peer when it comes to technological talent.

In the years to come, look for Israel to build upon its reputation for excellence and become a worldwide leader in an increasing number of growing industries, such as cybersecurity.

Israelis have an innate talent for using modern technologies to revolutionize existing industries, as well as for creating entirely new ones based on the ever-evolving global needs. This drive to innovate and improve the world around them is an invaluable skill that will continue to define them as a global leader for the foreseeable future.

As we all know, Israel’s origins date all the way back to the time of the Bible, where it was described as the land of milk and honey, blessed by God, and promised to the Jewish people. Today, more than ever, the Jewish people in Israel are fulfilling this promise and destiny.

In many ways, it is a mirror of the United States on a far smaller scale. Both countries are champions of the same core values. The Jewish state and its people are truly living out their mandate to be light unto the nations.

When it comes to U.S. leaders, Israel has found no greater friend than President Donald Trump. He has already acted to correct a historic wrong by recognizing Jerusalem as Israel’s capital and announcing his intention to move the U.S. Embassy there.

I personally cannot wait to visit the new embassy in its rightful place in Jerusalem. This critical and momentous change marks the beginning of a new era that will further strengthen the invaluable ties between our two great nations.

As Israel continues to establish its dominance alongside the U.S. as a global leader in technology and business, we should welcome new and increased opportunities to grow together for the good of both our countries and the entire world.