How Trump’s Cool-Headed Response to Austin Bombings Helped Everyone 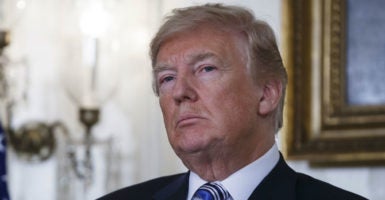 President Donald Trump tweeted Saturday that the U.S., U.K., and France had made "a perfectly executed strike" on Syria. (Photo: Alex Edelman/UPI/Newscom)

A marked difference in the Trump administration’s handling of the recent Austin, Texas, bombings was the refusal by federal law enforcement to leap to conclusions that would have driven a partisan, political agenda.

As we’ve seen in the past, the Fort Hood ambush was inaccurately labeled as workplace violence. The Orlando nightclub attack was first characterized as a hate crime.

In both instances, the knee-jerk label of these attacks led to divisive debate and provided distraction, drawing important resources toward these fictitious narratives and away from a quicker resolution.

Despite the push from members of the Congressional Black Caucus to prematurely label these bombings as “ideologically or racially motivated” without any factual basis to do so, thankfully, federal law enforcement instead took a deliberative “measure twice, cut once” approach to addressing the recent attacks in the Lone Star State.

As a former elected prosecutor who has prosecuted hundreds of cases in Texas, I understand the importance of having the facts and evidence drive the investigation, rather than starting from an assumed outcome and working backward to justify that theory.

Had the Austin serial bomber been arrested, instead of killed, this due diligence would have been key to obtaining a conviction.

In past deadly attacks, this rush by elected officials to politicize acts of violence have caused harm beyond the acts themselves. Blame is cast faster than the criminals are caught.

As we saw this month in Austin, discipline in message allowed law enforcement to focus on their jobs, rather than spending time addressing partisan rhetoric.

Members of Congress like Rep. Sheila Jackson Lee, D-Texas, who sought to turn this tragedy into a divisive issue should learn from President Donald Trump’s leadership, who remained silent and allowed law enforcement to do their jobs until the bomber was killed.

The recent bombings were not only personal to me as a legal expert, but as a Texan who was only 1,200 feet away from the Sunday explosion.

As I kissed the forehead of my sleeping 8-year-old son that evening, the fourth bomb went off. Occurring in our historically peaceful, central Austin neighborhood, the deep boom resembled large fireworks exploding in the distance. With only a few minutes passing, the sounds of sirens and dogs barking filled ears.

Overnight and into the next day was surreal. While police helicopters circled overhead, we read the stream of neighborhood social media posts about the explosion—most speculative and contradictory. At dawn, a quarter of the neighborhood was cordoned off as a crime scene.

My neighbors inside the area were ordered to stay indoors as dozens of law enforcement meticulously walked the area in the daylight looking for shrapnel and clues. Meanwhile, residents turned over home security footage.

Even in this aftermath, Austin law enforcement and the FBI resisted the pressure to rush to conclusions. When the first two Austin victims were identified as African-American, the media jumped to the assumption that these bombings were aimed at targeting prominent black families. But the Caucasian victims of the fourth attack dispelled this myth before it could become the narrative.

The fifth and sixth bombs delivered to FedEx appear even more indiscriminate than first believed. But again, the federal response remained measured.

In seeking to hold accountable and bring to justice those responsible for terror attacks and murders, we cannot forget one of the lessons from the Atlanta Olympics.

On July 27, 1996, an explosion ripped through Centennial Olympic Park, killing one and injuring over 100 people. Richard Jewell, a man who saved many more lives when he found another bomb, was later considered a suspect undergoing “trial by media” with great toll to his personal and professional life.

Jewell’s case is considered an example of the very real damage that can be done by assumptions based on unreliable or incomplete information.

This administration has led well amid this tragedy, and federal law enforcement has wisely heeded these critical lessons from the past. Law enforcement was candid when they did not have all the answers.

This, and the refusal by those involved to rush to judgment, was key for the public to trust this process and show patience. Now that the killer is dead, one of the lessons from this tragedy is how the thoroughness and deliberate speed of this administration’s response aided to bring those responsible swiftly to justice.