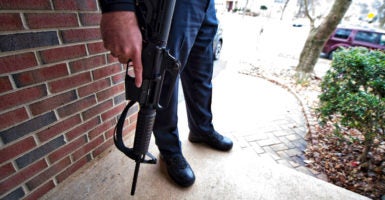 In the gun control debate that reignited after the Feb. 14 shooting at a Florida high school, much of the mainstream media appears to have joined in calls for stricter laws restricting gun ownership for Americans.

What the media pundits aren’t talking about so much, however, is how often guns in the right hands have saved lives. Here are 12 such instances in the past 12 years.

Earlier this month, Robert Rodriguez and his wife awoke to an intruder with a knife in their home in Austin, Texas. Rodriguez, a former sheriff’s deputy, held the intruder at gunpoint until authorities could reach his house. (Restoring Liberty)

2. Gun Turns a Victim into a Victor

In February, a woman and her daughter used personal firearms to save each other from an armed robber at their family-owned liquor store in Tulsa, Oklahoma. The would-be robber was shot in the leg, and the two women were not harmed. (ABC6)

In February, a man in Oswego, Illinois, used his AR-15 rifle to intervene in an argument in which someone had been stabbed. Dave Thomas saw a man stabbing another person and ran to his house to get his gun. The assailant fled, but was quickly caught by police. (WGN-9)

In March 2016, a 22-year-old woman pulled her gun on men who had followed her to her car and threatened to steal her belongings outside a Dollar Tree store in Oklahoma City. The presence of a gun sent the three would-be robbers running. (KOCO 5 News)

In September 2014, Mark Vaughan, a reserve sheriff’s deputy and chief operating officer for Vaughan Foods, used his personal firearm to wound a man who was a former employee in Moore, Oklahoma. The fired employee had returned to the workplace and beheaded one  employee and seriously injured another. (The Washington Times)

In June 2013, Jan Cooper, 72, possibly saved her life and that of her wheelchair-bound husband, an 85-year-old veteran of World War II. A man was breaking into the Coopers’ home in Anaheim, California, when she fired her revolver and scared off the intruder. (NBC4)

In January 2013, a student opened fire at Prince Middle School in Atlanta. After wounding another student, the suspect was disarmed by an armed guard stationed at the school. (The Washington Times)

In July 2012, Samuel William, 71, may have saved the lives of innocent bystanders at an internet cafe in Ocala, Florida. Two would-be robbers had entered the cafe with weapons when William pulled out his gun and shot and wounded them. (The Washington Times)

On New Year’s Eve 2012, Sarah McKinley, an 18-year-old mother of a 3-month-old, may have saved her life and that of her baby in Blanchard, Oklahoma. Two intruders, one of whom had a knife, were attempting to enter McKinley’s mobile home just a week after her husband had died of cancer. McKinley fatally shot one intruder and scared off  the second one. (The Washington Times)

In February 2007, Kenneth Hammond, an off-duty police officer, drew his weapon and confronted a shooter who had opened fire in a shopping mall. Sulejman Talovic had entered Trolley Square Mall in Salt Lake City armed with a shotgun and a backpack full of ammunition. With the help of another officer, Hammond was able to stop the gunman, who killed five before being fatally shot. (CBS News)

In January 2006, an employee of Media Madhouse in Elkhart, Indiana, shot a man who entered the building holding a gun on an employee and demanding money. The armed employee shot the intruder, potentially saving other employees and customers. (The Washington Times)