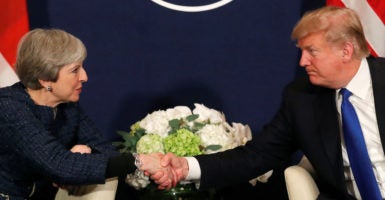 At least 26 countries have expelled Russian citizens in retaliation for Russia’s alleged involvement in a nerve agent attack against a former double agent and his daughter in Salisbury, England.

President Donald Trump moved to support British Prime Minister Theresa May by approving the expulsion Monday of 60 Russian diplomats or intelligence officers from the U.S.

The U.K. expelled 23 Russians, and the actions so far of other nations, plus the NATO organization, brought the number of announced expulsions to 150.

Diplomats expect similar responses from the government of Russian President Vladimir Putin, which has denied a part in the nerve agent attack.

“Russia looks increasingly isolated on the world stage and Vladimir Putin’s thugocracy is encountering overwhelming opposition from nations across the free world,” Nile Gardiner, director of the Margaret Thatcher Center for Freedom at The Heritage Foundation, told The Daily Signal.

“The United States is at the very heart of the coalition that is standing up to Putin’s action,” Gardiner said.

NATO followed the U.S. by announcing Tuesday that it would expel seven Russians.

Sergei Skripal, 66, the former double agent, and his daughter, Yulia, 33, were in stable but critical condition in a local hospital.

Skripal was convicted in Russia of high treason. His family has resided in the United Kingdom for almost a decade since Skripal’s release from prison. That release, secured through a spy swap between the United States and Russia in 2010, took place in an airport in Vienna.

The political editor of The Sun, a British newspaper, tweeted:

Theresa May confirms 18 different nations are expelling more than 100 Russian 'diplomats' today – 15 EU states, plus USA, Canada and Ukraine. This will hurt.

The White House released a statement early Monday regarding the expulsion of the 60 Russian diplomats and intelligence officers in response to the poisoning:

The United States takes this action in conjunction with our NATO allies and partners around the world in response to Russia’s use of a military-grade chemical weapon on the soil of the United Kingdom, the latest in its ongoing pattern of destabilizing activities around the world.

In addition to NATO, here are 26 countries that have acted so far, plus the number of Russians expected to be expelled from each:

The United States also announced it would close the Russian consulate in Seattle, which is close to the Navy’s Kitsap-Bangor submarine base. The base is widely thought to house nuclear weapons.

In Britain, May publicly blamed Russia for the nerve agent attack March 12 during a speech to Parliament, saying:

Based on the positive identification of this chemical agent by world-leading experts at the Defense Science and Technology Laboratory at Porton Down; our knowledge that Russia has previously produced this agent and would still be capable of doing so; Russia’s record of conducting state-sponsored assassinations; and our assessment that Russia views some defectors as legitimate targets for assassinations; the government has concluded that it is highly likely that Russia was responsible for the act against Sergei and Yulia Skripal.

It said the allies “abhor” the attack against Skripal and his daughter, and “call on Russia to live up to its responsibilities as a member of the UN Security Council to uphold international peace and security.”

Trump voiced his support for May during a phone call last week with French President Emmanuel Macron.

The White House said Trump and Macron “reiterated their solidarity with the United Kingdom in the wake of Russia’s use of chemical weapons against private citizens on British soil and agreed on the need to take action to hold Russia accountable.”

“The reality is that the U.S.-U.K. special relationship is in robust health,” Gardiner told The Daily Signal. “Washington and London are working extremely closely in leading the international effort to confront the Russian menace.”

Russia continued to deny all involvement, and the Kremlin’s rhetorical response to the diplomatic retaliation was swift.

The Russian Embassy in Washington, D.C., made a show of surveying its Twitter followers Monday to see which U.S. consulate should be closed in Russia in response.

US administration?? ordered the closure of the Russian Consulate in Seattle @GK_Seattle??. What US Consulate General would you close in @Russia, if it was up to you to decide

Ken McIntyre contributed to this report, which was updated to include Nile Gardiner’s comments and expansion of the coalition to 26 nations.