Ireland Has Been a Model in Fiscal Reform, but Times Could Soon Get Rocky 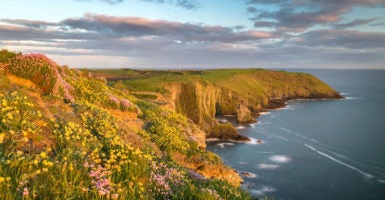 Ireland ranks high on the scale of economic freedom, but could be relying too much on corporate tax revenues. (Photo: Rainbow79/Getty Images)

Ireland’s strong economic fundamentals and business-friendly approach make it a popular destination for foreign corporations, and they bring with them jobs and billions of euros in tax revenue.

Some are concerned, however, at what they see as an over-reliance on corporate tax revenue and multinational companies, which could bring cloudy skies as international competition heats up to provide the best business and economic climate.

In The Heritage Foundation’s 2018 Index of Economic Freedom, Ireland ranks No. 6 in the world out of 180 countries ranked. With a score of 80.4 on a scale of 0 to 100, the country is once again considered economically free.

Recent progress rests primarily on a concerted effort at fiscal discipline. The Irish government’s deficit shrank from 12.6 percent of Ireland’s gross domestic product in 2011 to just 0.6 percent in 2016.

One reason for this is that multinational companies have increasingly decided to call Ireland home. Companies such as Apple, Facebook, and Google have all set up overseas headquarters in Ireland in recent years owing to the country’s low corporate tax rate of just 12.5 percent and other business-friendly tax laws.

So many multinational companies have been migrating to Ireland that the Irish government was able to bring in tax revenue of 50.7 billion euros in 2017, an all-time high.

But some fear that an economic storm may be brewing.

The Irish government may be relying too much on corporate tax revenues—16 percent of all tax revenues in 2017—and that could dampen the parade if it is combined with overspending.

The Irish government needs to be wary of overspending if tax revenues decline, so as not to have a repeat of the 2008 bursting of the housing bubble, which had a negative impact on almost every tax category in Ireland.

Another concern is that foreign companies might leave Ireland for countries with even lower rates, or perhaps even the United States, where taxes are lower now than in recent years.

The Tax Cuts and Jobs Act of 2017, which lowered the U.S. corporate tax rate from 35 percent to 21 percent, contains other forms of tax relief for businesses as well, and as a result, the U.S. has become a more attractive place to run a business.

So, with the potential storm clouds on the horizon, it will be interesting to see if Ireland’s government can continue to maintain fiscal discipline and hold on to its position in the top ranks of the economically free.