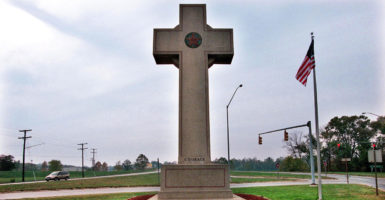 The 4th U.S. Circuit Court of Appeals ruled that the Peace Cross, a monument dedicated to local residents killed in World War I, must be torn down. (Photo: The Washington Times/Zuma Press /Newscom)

When Republican congressional leaders went to the White House on Jan. 23, 2009—just three days into Barack Obama’s presidency—to discuss legislation, he helpfully reminded them that his policy preferences necessarily had to prevail because “elections have consequences, and at the end of the day, I won.”

Obama is out of office now, but the regrettable consequences of his election remain strewn across the political landscape. Perhaps nowhere is that more consequential than in the makeup of the 4th U.S. Circuit Court of Appeals.

Obama appointed six of the eight judges who, on March 1, refused to reconsider a wrongheaded 2-1 ruling of a 4th Circuit panel last fall. That ruling found the World War I memorial Peace Cross in Bladensburg, Maryland, suddenly “unconstitutional” after more than 90 years without controversy.

Erected with funding from the American Legion and local families in 1925, at what is now the intersection of U.S. Route 1 and Maryland state Route 450, the 40-foot cross features a plaque listing the names of 49 Prince George’s County men who gave their lives in what H.G. Wells dubbed—wrongly, as it turned out—“the war that will end war.”

The Maryland-National Capital Park and Planning Commission took control of the land on which the memorial sits in 1961 because of its location.

According to the October ruling, the commission’s paying for the upkeep and repairs of the monument “has the primary effect of endorsing religion and excessively entangles the government in religion”—supposedly in violation of the First Amendment’s establishment clause.

That plaque at the base of the memorial also includes the words “valor, endurance, courage, devotion.” But the only thing the secularists at the American Humanist Association (which filed the suit) is “devoted” to is anti-Christian intolerance.

To the humanists, the decision was “a big win … for the separation of church and state.” Never mind that that’s a phrase and a concept nowhere to be found in the Constitution, the left’s assertions to the contrary notwithstanding.

The vote was 8 to 6 against reconsidering the  panel’s ruling, with all six Obama appointees to the 4th Circuit in lockstep (along with an appointee of President Bill Clinton and another, shamefully, from President George W. Bush.)

Two of the “Gang of Eight” judges, Stephanie D. Thacker and James A. Wynn, also made up the 2-1 majority in the October ruling. Both were put on the bench by Obama, for whom judicial appointments were a key component of his 2008 campaign vow of “fundamentally transforming” America.

Writing for the majority in refusing to rehear the case, Wynn held that the plaque commemorating the local veterans’ sacrifice was insufficient to offset the sectarian religious iconography of the cross itself.

“We cannot allow it to be the final word,” said Hiram Sasser, deputy chief counsel for First Liberty Institute, the Plano, Texas-based nonprofit public interest law firm representing the American Legion, warning of the slippery slope the 4th Circuit’s ruling will create if it’s not repudiated by the Supreme Court.

“If this decision stands, other memorials—including those in nearby Arlington Cemetery—will be targeted as well,” Sasser warned.

In her majority opinion back in October, Thacker dismissed concerns about how this ruling might affect other monuments, noting that size does, in fact, matter.

“The crosses [at Arlington National Cemetery] are much smaller than the 40-foot-tall monolith at issue here,” she wrote. 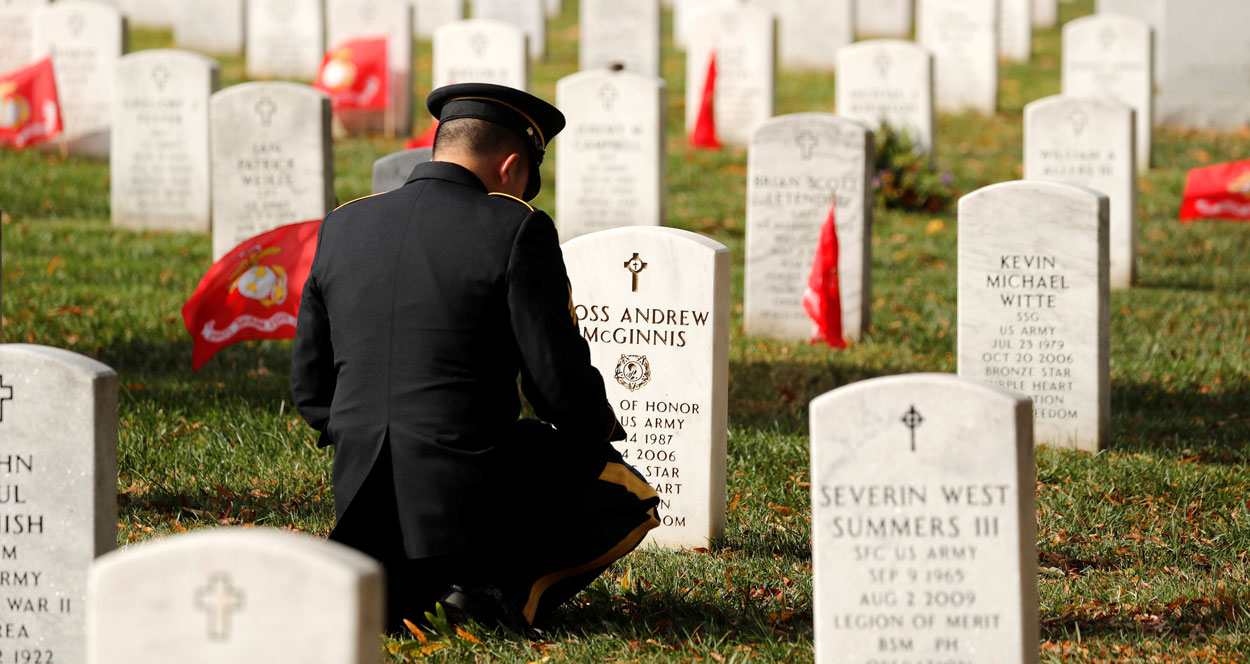 Many tombstones at Arlington National Cemetery are marked by crosses and other religious symbols. (Photo: Kevin Lamarque/Reuters/Newscom)

In his dissent in October, Chief Judge Roger L. Gregory wrote that the First Amendment “does not require the government ‘to purge from the public sphere’ any reference to religion.”

Gregory, initially nominated by Clinton late in his term and renominated in 2001 by Bush, added he could not agree that a monument honoring veterans “violates the letter or spirit of the very Constitution these heroes died to defend.”

Maryland Gov. Larry Hogan, a Republican, called the 4th Circuit’s ruling “an affront to all veterans,” and a spokesman for Maryland Attorney General Brian Frosh, a Democrat, said his office would file a brief in support of the veterans memorial monument when the case is appealed to the Supreme Court, as it will—and should—be.

A reversal by the justices would send a much-needed shot across the bow of an out-of-control 4th Circuit.

It would also send a clear signal to the neighboring 3rd Circuit Court of Appeals, which will be hearing an appeal by Lehigh County, Pennsylvania, of a ruling against its nearly 75-year-old county seal.

The Lehigh County seal, which dates to 1944, includes a cross among a number of other historical symbols. On March 12, the county filed an appeal of a September ruling in favor of the Freedom From Religion Foundation, which is demanding a redesign of the county seal without the cross.

“In this case, neither the longevity of the seal, nor the secular symbols surrounding the cross detract from the religious message that a cross conveys to the reasonable observer,” wrote District Judge Edward Smith in his ruling.

Not surprisingly, Smith is also an Obama appointee, further underscoring the notion that elections have consequences—in this case, adverse consequences.