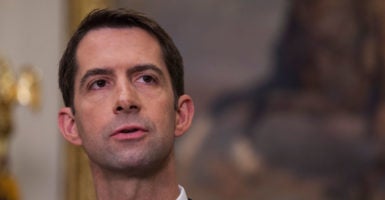 “It killed more than 20,000 Americans last year and has been a driving force behind the opioid crisis in the United States,” Sen. Tom Cotton says of fentanyl. “But while the epidemic has spiraled, our drug laws have been stuck in the past." (Photo: Zach Gibson/dpa/picture-alliance/Newscom)

Sen. Tom Cotton, R-Ark., has filed legislation to allow stricter prison terms for dealers of fentanyl, a substance he calls a “weapon of mass destruction.”

Cotton introduced the legislation Thursday along with Senate colleagues who include Sen. Lindsey Graham, R-S.C., and Sen. Ben Sasse, R-Neb. The bill would significantly reduce the amount of fentanyl a person must have in their possession to trigger mandatory sentencing minimums for narcotics trafficking, reports Arkansas Online.

The senators argue the change will be crucial for helping local law enforcement fight against the relentless efforts of fentanyl traffickers and distributors, giving authorities the legal tools to keep dealers off the streets.

Cotton said at a press conference Thursday that fentanyl is “as much like a weapon of mass destruction as it is a drug.”

“It killed more than 20,000 Americans last year and has been a driving force behind the opioid crisis in the United States,” Cotton said in a press release. “But while the epidemic has spiraled, our drug laws have been stuck in the past. This bill will make sure, when it comes to opioid distribution and trafficking, the punishment fits the crime.”

Drug overdoses are now the leading cause of accidental death for Americans under age 50, killing more than 64,000 people in 2016, according to the Centers for Disease Control and Prevention.

Opioid overdoses made up a staggering 66 percent of all drug overdose deaths in 2016, surpassing the annual number of lives lost to breast cancer.

Deaths from synthetic opioids like fentanyl, a painkiller roughly 50 to 100 times more powerful than morphine, experienced a particularly dramatic increase, more than doubling from 9,580 deaths in 2015 to 19,413 in 2016.

Officials say the epidemic is contributing to declining life expectancy in the U.S. Life expectancy dropped for the second consecutive year in 2016 for the first time since an outbreak of influenza in 1962 and 1963.