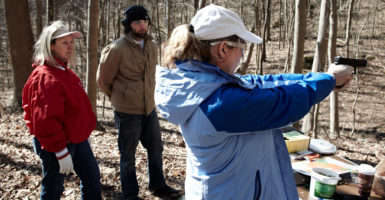 Mark Zilinskas, a high school math teacher in Pennsylvania, took firearms and emergency response training even though his state prohibits guns in school.

Allowing teachers to have access to firearms at school became a national issue after President Donald Trump advocated it in response to the Feb. 14 massacre of 17 at a Parkland, Florida, high school.

Pennsylvania is one of a few traditionally pro-gun control states where school personnel have been trained by the Ohio-based FASTER Saves Lives program. The name is an acronym for Faculty/Administrator Safety Training and Emergency Response.

The program requires training that exceeds the level for Ohio state troopers as well as training to provide emergency medical treatment.

FASTER Saves Lives has trained about 1,300 public and private school personnel in 12 states, including Illinois, Maryland, Michigan, and New York. The program is sponsored by the Buckeye Firearms Association.

Zilinskas, a teacher at Indiana Area Senior High School in the city of Indiana, Pennsylvania, has been urging state lawmakers to allow school districts to make the decision.

“After Sandy Hook, I asked if we could do a similar program to what was going on in Ohio,” Zilinskas told The Daily Signal, referring to the Connecticut elementary school where a gunman killed 21, mostly young children. “I testified to the [Pennsylvania] House Education Committee. I took the course to be informed and wanted to be able to answer questions.”

According to a list compiled by the Buckeye Firearms Association on state laws authorizing firearms in school, Illinois, Michigan, and New York prohibit “concealed carry” in K-12 schools, but allow authorization by individual school or school district.

A middle-school science teacher in western New York state, who requested his name not be used out of fear for his job, said he told his supervisor he went through the training.

“I don’t know who I would go to, the superintendent or the [school] board, about changing the policy,” the science teacher told The Daily Signal. “I don’t know. They might say this guy has been here for 17 years, but he may be a gun nut.”

The science teacher said he has been around guns for much of his life, but still learned much from the thorough training.

“I took the FASTER program just for the experience. I already carry on my own to protect my family,” he said. “I absolutely believe schools should implement the emergency first-aid training. Why wouldn’t you?”

A sheriff’s deputy working as an armed school resources officer confronted a gunman March 20 at a school in St. Mary’s County, Maryland.

In Maryland, concealed carry is prohibited in grades K-12. Local schools cannot choose to allow it except for designated security officials, or if a firearm is brought to a school for education or historical purposes, according to the Buckeye Firearms Association list.

John Rigney, a volunteer at a private school in Anne Arundel County, Maryland, recently testified before the Maryland House Judiciary Committee about a bill to authorize local school districts to allow trained teachers to carry firearms.

Rigney, who is also a firearms instructor in Maryland, said he thinks the St. Mary’s resource officer’s actions demonstrate the importance of quick action by school personnel.

“The resource officer should be a good example of how well an armed teacher could respond,” Rigney told The Daily Signal. “Do I see this coming to Maryland? I would hope the last attempt proves the positive effects of a training program.”

“Most people who initially oppose training for teachers change their mind once they understand it,” he said. “It’s not training schoolteachers to be police officers. The training is the same as [for] Ohio state troopers, and exceeds that training. Once they see the success of it, that it is not about guns, they will come on board.”

Michigan allows private institutions, such as schools and churches, to decide for themselves on allowing concealed carry.

Julian Petzold, principal of Trinity Lutheran School in Clinton Township, Michigan, also has been through the FASTER training. But Trinity is still evaluating the policy.

Townhall reported that 18 states allow some form of carrying firearms by authorized adults at schools. Some examples are otherwise strict gun-control states.

California law allows firearms in school with the approval of the local superintendent, according to Townhall. In Connecticut, school officials have to approve any carrying of firearms.