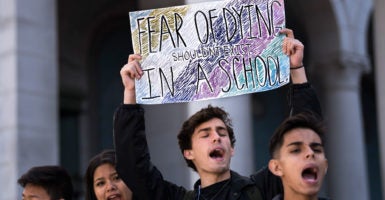 Students protest March 14 in Los Angeles as they and peers across the U.S. walk out of classes to protest "gun violence" in the wake of the Feb. 14 massacre at a Florida high school. (Photo: Ronen Tivony/NurPhoto/Sipa USA/Newscom)

Public school teachers who support the Second Amendment are being required to finance political activism they oppose, such as this weekend’s March for Our Lives calling for more gun controls, federal court filings say.

The California Teachers Association, the largest affiliate of the National Education Association with about 325,000 members, issued a statement expressing opposition to President Donald Trump’s proposed policy of arming some teachers and other school officials as a safeguard against school shooters.

The Daily Signal acquired a copy of an email message from Eric Heins, president of the California Teachers Association, to individual teachers in which he urged them to take part in marches and events across the country that call for more gun controls in the wake of the mass shooting at a Florida high school.

Heins builds his message around the March for Our Lives event set for noon Saturday in Washington, D.C., in response to the shooting in Parkland, Florida, that left 17 dead.

“While the main march is in Washington, D.C., there are marches and events across the country (and world!) to join, and other ways to get involved in the fight against gun violence,” Heins says in the email. “Attending or participating? Tag #WeAreCTA in your posts!”

Trump first made the suggestion to arm teachers during a White House meeting in February with parents, students, and school administrators from Marjory Stoneman Douglas High School, where a 19-year-old with a rifle had killed 17 and wounded 17 others a few days earlier.

The National Education Association, which has about 3 million members nationwide, issued its own statement claiming that “parents and educators overwhelmingly reject the idea of arming school staff.”

However, in a case pending before the federal district court in Los Angeles, public school teachers who filed a First Amendment lawsuit against the California Teachers Association say their political views and those of colleagues often conflict with the political agenda of union leadership.

Under California’s “agency shop” law, teachers who decline to join a union are required to pay “fair share” union fees to cover the costs of collective bargaining. While nonunion teachers technically are permitted to opt out from paying for political activism, the opt-out process is unnecessarily burdensome and the collective bargaining process itself is laced with such activism, the plaintiffs in Yohn V. CTA argue.

Union leaders with the California Teachers Association who use union fees to help finance gun control campaigns are violating the free speech rights of teachers who don’t agree, according to the legal reasoning advanced by the Yohn plaintiffs:

Requiring nonmembers to make forced contributions to public-sector collective-bargaining efforts serves no compelling state interest and is not narrowly tailored.

Similarly, requiring nonmembers to contribute to nonchargeable union expenditures, unless they annually opt out of doing so, also serves no compelling state interest and is not narrowly tailored.

Also, neither the agency shop nor the opt-out requirement can satisfy even the lower standard that applies to employee speech on matters of public concern, under which courts balance the employee’s interests in speaking against the government’s interests, as an employer, in suppressing the speech.

The union president’s email message to teachers includes a link to local “March for Our Lives” events and various social media tools that may be used to advance the cause of gun control.

“Have you had ENOUGH of gun violence in schools?” Heins asks in the email. “Are there resources you’d like to be armed with, other than guns? Join other California educators and easily record and share your video story with us. You can use your phone, laptop or tablet!”

The Daily Signal requested comment from a media relations officer with the California Teachers Association on the free speech arguments raised in the Yohn case. The spokesman had not responded by publication time.

Both the National Education Association and the California Teachers Association are sponsors of  a National Day of Action Against Gun Violence in Schools on April 20.

Ryan Yohn, the lead plaintiff in the Yohn case, has been a middle-school teacher for 13 years for the Westminster School District in Southern California. His case is closely modeled after Friedrichs v. California Teachers Association, which made it all the way to the Supreme Court.

But after Justice Antonin Scalia’s unexpected death about a month after oral arguments on Jan. 11, 2016, the high court wound up deadlocking 4-4. That left a lower court ruling in place that upheld California’s “agency shop” law.

The Yohn case has been stayed pending the outcome of another case now before the Supreme Court, Janus v. AFSCME, that raises similar First Amendment concerns.