How This College Conservative Counters Liberal Intolerance on Massachusetts Campuses 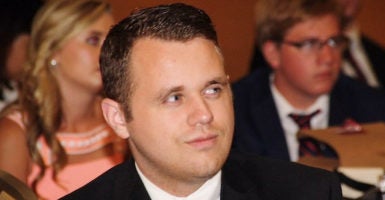 “Discrimination against anyone is unacceptable, especially for … a college campus where civil discourse and diversity of beliefs, thoughts, and ideologies should be accepted and welcomed,” Jason Ross says. (Photo courtesy of Jason Ross)

The leader of Republican groups at Massachusetts colleges says the position is rewarding because it allows him to support fellow students, such as the one who felt attacked by a professor who openly derided President Donald Trump.

The episode occurred last fall at Bridgewater State University, where Jason Ross is a senior.

“It wasn’t a class I was in, it was actually a girl I know [and] a class she was in,” Ross, 22, told The Daily Signal in a phone interview. “The professor, he posted on Facebook, ‘F— Donald Trump and f— anyone who voted for Donald Trump, you are not welcome here.’”

“And that Facebook [page] was something he would use to promote things for the class as well,” Ross added.

Ross, who is chairman of the Massachusetts Alliance of College Republicans, said his friend was reluctant to speak with the English professor who posted such statements.

He offered to go to bat for his fellow student, Ross said. He set up a meeting with the president of Bridgewater State University, Fred Clark, to discuss the English professor, Garrett Nichols, and what his friend considered intimidating attacks on Trump and the president’s supporters.

Nichols made derogatory comments about Trump only on Facebook, Ross said, but “was also very divisive in class.”

He said he was pleased when the university put Nichols on temporary leave as a result.

Ross previously was secretary for Massachusetts College Republicans and chairman of the Bridgewater State University chapter of the group, which he founded.

The college senior is among young Americans participating in the White House’s “Generation Next” conference for millennials, scheduled Thursday afternoon at the Eisenhower Executive Office Building.

The gathering will focus on jobs, the opioid drug crisis, and free speech on campus, and include appearances by Trump and first daughter Ivanka Trump.

Ross is a political science major, with a concentration in public administration.

“Political campaigns can be fun, and stressful, but my true passion is public service,” he told The Daily Signal. “As a proud Eagle Scout, I love helping people and the community, so I would ultimately love to be a town administrator.”

Ross is from West Bridgewater, a small farm town in Massachusetts. His father repairs trucks and sells truck parts, and his mother is a makeup artist.

“My parents are both moderately conservative, but we very rarely discussed politics growing up, so I would say my parents did not influence my political beliefs,” Ross said.

“Philosophically, I would say they did shape me, by encouraging me to grow up as a Roman Catholic. And my dad always encouraged me to stay involved in Boy Scouts. Boy Scouts, and my journey to achieving Eagle Scout, I would say had the greatest impact shaping who I am today,” he said.

Ross is the first in his family to go to  college, which he says should be a place that welcomes opposing or minority viewpoints.

“Regardless of your political party … if someone is not welcome, or a certain type of group based simply on beliefs is not welcomed, I mean, that’s absurd.”

Even though his views don’t align with those of the school administration, Ross said, he credits it for decisiveness.

“Discrimination against anyone is unacceptable, especially for … a college campus, where civil discourse and diversity of beliefs, thoughts, and ideologies should be accepted and welcomed.”

The Daily Signal requested comment from both Nichols and Clark, but did not receive a response by publication deadline.

This wasn’t the first time Ross met with the university president to discuss concerning comments made by professors.

A professor in the political science department, the Republican student leader said, made remarks in class that were disrespectful of military veterans as well as Trump.

Ross said the Massachusetts Alliance of College Republicans faced a big protest when it hosted an event with veterans on issues important to them and included the head of the Massachusetts chapter of the Veterans of Foreign Wars.

“A lot of the students were outside protesting, putting Iraqi flags outside, like planting them in the ground,” Ross said. “This would be like Saddam Hussein-era Iraqi flags, it was just so disrespectful.”

His role as state chairman of College Republicans exposes him to the sort of personal attacks from the left that he seeks to defend other students from, Ross said:

I have gotten a lot of negative feedback from people who do not even know me necessarily, which I think is always funny. I probably get four [Facebook] friend requests a day from people I don’t even know. And I’d say half of them are very left wing and they—not every day, occasionally—they will message me. And … it will be nasty stuff, just mean stuff.

Despite such pushback, the college senior sounds optimistic.

Under my leadership, we have also fundraised significantly more than ever before. Because of that, we have been able to produce chapter supplies such as posters, koozies, and stickers, all proudly produced locally in Massachusetts by a small business, which has effectively helped recruit more members and keep current members interested and proud to be part of the organization.

We’ve grown so much, and that’s what I want. I am not doing this for a Republican cause, I am doing this … for the people to just get involved and learn more.