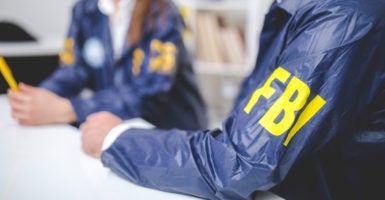 Local officials in Jupiter, Florida, were told FBI charges would be brought against the radicalized teen in summer of 2017—yet they never were. (Photo: South_agency/Getty Images)

A sickening act of youth violence in Florida glinted across the news headlines last week, and then disappeared from view.

There will be no CNN town halls or student walkouts over the lost life and preventable tragedy, because there are no guns to blame. Only dropped balls.

According to a probable cause affidavit filed by the Palm Beach County police, 17-year-old Corey Johnson bought a knife last Sunday and brought it with him to a sleepover at longtime friend Kyle Bancroft’s house. At 4 a.m., he decided to kill Kyle’s mother, Elaine; his brother, Dane; and Dane’s friend, Jovanni Sierra Brand.

Corey repeatedly stabbed Jovanni in his bed and slit his throat. Then he attempted to murder Elaine as she approached the boys’ bedrooms in response to Jio’s last gasps. Dane rescued his mom and sustained 32 stab wounds. Both were hospitalized and survived. Jio was buried last Friday—less than a week after celebrating his 13th birthday at a pizza party attended by Corey.

The accused killer told police he “stabbed the victims because of his Muslim faith,” watched videos of “Muslim jihadists” on his cellphone, and “was reading the Quran from his phone just prior to the attack to give him courage to carry out his intentions.”

Perhaps he read the sword verses for inspiration? Fort Hood jihadist Nidal Hasan quoted from them in his presentation to classmates and superiors at Walter Reed Medical Center: “I have been commanded to fight the people until they testify that there is no deity worthy of worship except Allah.”

Or maybe it was Surah 9:5: “Fight and slay the idolaters wherever ye find them and seize them, confine them, and lie in wait for them in every place of ambush.”

Corey’s brutal attack was no bolt out of the blue, no unexpected incidence of sudden jihad syndrome. Local school officials and police in Palm Beach County, along with federal and international law enforcement authorities, had encountered more red flags in their years of dealing with Corey than at a Communist May Day parade in Havana.

In middle school, Corey had reportedly stalked a student and sexually harassed her. She told school police. Nothing happened. He dabbled in white supremacy, anti-Semitism, and gay-bashing, and then immersed himself in radical Islam—rising at 5 a.m. daily to pray and revere the Syrian flag.

Corey’s online jihad agitation, physical abuse, and addiction to ISIS beheading videos prompted his sister in 2016 to confide in a school therapist, who contacted the local sheriff’s office.

Corey’s mom, the sister told school officials, was in denial. The sister so feared for her life she slept with a knife under her bed.

The FBI’s Joint Terrorism Task Force became involved after European intelligence counterparts told them Corey had used Instagram to issue security threats to a Catholic high school in England. The threats “were so severe in nature,” local officials discovered, “that up to 100 students were removed from the school fearing some kind of attack.”

One of the messages threatened: “By Allah, we will kill every single Infidel student at this school.” Corey told FBI agents he “was supportive of known terrorist Anwar al Awlaki”—the spiritual patron of lone-wolf jihadists.

The FBI’s plan of action? Inaction. The agency watched and waited and wanly admonished Corey to knock it off because authorities “believed a redirection approach would be the most beneficial regarding his conduct.”

“Redirection” is akin to the alternative social justice strategies school officials and police used in Parkland, Florida, before 17 innocent students and teachers died at the hands of a teen shooter who was a walking neon sign for a mental health catastrophe.

No referrals, no charges, no records, no problems.

Except for the fact that Corey ignored the FBI and continued his Islamic instigation online. After nearly a year of foot-dragging, the FBI gathered enough evidence to bring federal charges against Corey for his social media terror threats.

According to records released by the Jupiter Police Department, local officials were told the charges would be brought in the summer of 2017. But on the early morning of the jihad stabbings at Palm Beach Gardens last week, the FBI and U.S. Attorney’s Office had yet to take action on a known radicalized threat who had menaced his family, his schoolmates, and innocents abroad.

It’s a familiar narrative for the FBI—from the Boston Marathon bombers to the Orlando nightclub shooter to the Fort Lauderdale airport jihadist to the San Bernardino terrorists. Family members, teachers, neighbors, and co-workers saw something and said something. Investigators investigated. But nobody did nuttin’ till it was too bloody late.

Nothing to see here; move along.