Airbnb May Not Be Good for Hotels, but It’s a Boon for Everyone Else 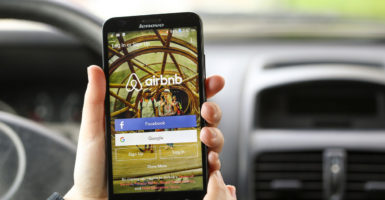 Airbnb allows travelers to find affordable lodging in a more personal and private setting than a hotel. (Photo: GoodLifeStudio/Getty Images)

Cities, counties, and states waging a war against short-term rentals by imposing hefty fines and burdensome regulations on hosts and booking platforms, such as Airbnb and VRBO, should reconsider their heavy-handed approach.

A new working paper published by the National Bureau of Economic Research finds that the presence of alternative lodging options financially benefits travelers, hosts, and the broader local economy.

The study was conducted by Chiara Farronato of Harvard Business School and Andrey Fradkin of MIT Sloan School of Management to determine the impact of peer-supplied short-term rentals on the economy.

The research shows that the “Airbnb effect” is indeed a real phenomenon. In cities where Airbnb is an option, travelers are able to find more affordable room accommodations through the short-term rental platform. As the supply of rooms goes up, hotels are feeling the effects and reacting with small price decreases to attract travelers.

The research indicates that in 2014, Airbnb renters on average had a consumer surplus of $41 per night in comparison to their hotel-stay counterparts.

The hosts themselves also saw a boost of about $26 in surplus per night. More diverse and affordable lodging options are resulting in longer stays—and more commerce within host cities from travelers purchasing goods and services in the local economy.

The research also found that short-term rentals are more flexible and more responsive to changing market conditions. Hotels have a limited number of rooms dedicated to accommodating guests. During off-seasons, hotels will have some empty rooms, and during peak seasons, demand can at times exceed hotel capacity.

Airbnb hosts respond to the change in market demand. In periods of high demand, hosts will put more lodging options on the platform. During the off-season, the number of active listings falls as hosts may choose to use their spare rooms themselves and to host family and friends, rather than accommodating short-term renters.

Alternative lodging options not only benefit the hosts and renters who use short-term rental platforms, but hotel customers as well. Airbnb has lessened the capacity constraints of hotels.

Short-term rentals directly affect hotel prices as well. With the demand for accommodations dispersed over a larger array of options, hotels are not able to skyrocket their prices during peak periods as much as they used to.

Hotel profits decrease slightly in markets with Airbnb activity. If Airbnb had not been an option for consumers in 2014, hotels in the 10 U.S. cities with the largest peer-hosting markets would have enjoyed a 3.69 percent increase in profits, according to Farronato and Fradkin.

What irks hotels is good news for consumers. The combination of cheaper hotel prices and the increase in room bookings through the Airbnb platform in 2014 resulted in a total of $276 million in consumer surplus in the studied cities.

Additionally, the research determined that roughly half of all Airbnb stays in 2014 would not have resulted in hotel stays had short-term rentals not been an option. Alternative lodging options actually increase tourism and overall travel, with direct benefits for local economies.

Airbnb and other platforms can also offer unique experiences to guests that are vastly different than those of hotels. Hosts are able to personalize stays for their guests, as well as give them a more homelike environment.

These factors make alternative options more appealing to some consumers, while others prefer the reliability and standard hospitality and convenience features offered by hotels. Competition works.

Legislators in several states continue to seek to create obstacles for short-term rentals on behalf of entrenched, legacy interests, such as  hotels and hotel employee unions.

Rather than shield big business and big labor from competition, states and localities should consider the broader benefits for their population and businesses when deciding how to treat this new market force.

The market for alternative accommodation options is rapidly expanding. The economic benefits will also continue to grow—if they are given the room to do so.