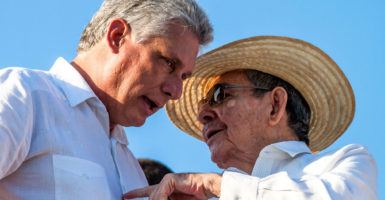 Over the weekend, the Castro regime held yet another unfree and unfair election. Only Communist Party officials were allowed to run, international observers were banned, and new dissidents were imprisoned.

It has been the same process for over half a century.

Unique to these elections, though, is the upcoming retirement of Gen. Raul Castro from his seat as president. Castro is expected to step down on April 19 and the recently elected National Assembly will vote for his replacement.

It is rumored that Castro’s hand-picked successor is the current vice president, Miguel Diaz-Canel. His assumption of power could mark the end of an era in which hereditary Castros led Cuba. A closer look at Diaz-Canel, however, shows this is no cause for celebration.

In a video that was leaked last year, Diaz-Canel disparaged Cuba’s dissidents and political prisoners as counterrevolutionaries. He also condemned the United States and independent media. Diaz-Canel continues to follow the Castro policy of demanding the U.S. lift the embargo against Cuba, without compensating America for the property Castro had stolen.

While Diaz-Canel and Castro have a different last name, they seem to share the same political DNA.

This continuation of Cuba’s adversarial leadership does not bode well for the future.

Cuba’s expected selection of Diaz-Canel reinforces how flawed President Barack Obama’s Cuba policy truly was. Over three years ago, Obama promised the U.S. that if we reset our policy toward the regime, bilateral relations would improve.

During his last two years in office, Cuba received a host of concessions including an embassy in the U.S., removal from the state sponsors of terrorism list, and increased commercial opportunities for Cuba’s military dictatorship.

In exchange, the Obama administration received nothing.

Cuba’s aggression has not been limited to only its own people. As I testified before Congress earlier this year, U.S. diplomats have also suffered harm from Obama’s weak-kneed policy.

Toward the end of 2016, U.S. diplomats stationed in Cuba reported ear pain and other neurological symptoms. The State Department’s medical director in the Bureau of Medical Services stated the diplomats described hearing a “high pitched beam of sound,” “incapacitating sound,” or a “baffling sensation.”

In total, 21 U.S. diplomats, three of their relatives, and two Canadian diplomats have been victimized by the attacks. An unknown number of personnel have permanent hearing loss and neurological injuries.

While ongoing investigations have yet to pinpoint the exact method of the attacks, the facts point to the regime’s involvement. Cuba has a long history of attacking U.S. diplomats. The island is also a police state, so it is nearly impossible that an attack of this magnitude could take place without the regime’s complicity or awareness.

For over half a century, the Castros’ leadership over Cuba has been illegitimate—they have never been elected by the people. While the era of a hereditary Castro president will most likely end on April 19, the regime’s brutal ideology will continue in Castro’s successor.

The eighth Summit of the Americas is scheduled to be held a few days before this illegitimate transfer of power. President Donald Trump should use the summit’s theme of “Democratic Governance Against Corruption” as an opportunity to publicly condemn Cuba’s sham elections.

While the region will not rally behind him, the Trump administration should remain steadfast in its support for Cuban freedom.