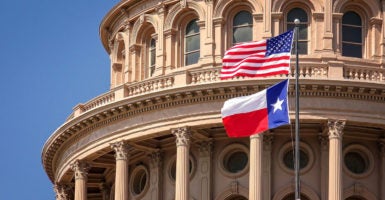 In a case litigated by Texas, a federal court struck down the government's ability to collect billions in taxes from states in order to subsidize Obamacare. (Photo: CrackerClips/Getty Images)

In a decision that has gotten almost no media attention, six states led by Texas have won another round against the Obama administration implementation of Obamacare.

Judge Reed O’Connor, a federal judge in Texas, threw out the Obama administration’s imposition of a federal fee or tax on states as a condition of continuing to receive Medicaid funds. O’Conner ruled March 5 that the fee violates the non-delegation doctrine of the Constitution and the requirements of the Administrative Procedure Act.

The 2010 Obamacare law imposed a “health insurance providers fee” on medical insurers to help pay for the subsidies provided by the federal government to individuals purchasing health insurance. However, the law specifically exempted states from having to pay this fee.

Texas and the other states who filed this lawsuit against the federal government in 2015 provide a majority of Medicaid services for their residents by contracting with, and paying a monthly fee to, managed care organizations, which then provide health care to eligible Medicaid beneficiaries.

The Centers for Medicare & Medicaid Services, a component of the Department of Health and Human Services, must approve all such state contracts for health care services. In 2014, the agency promulgated a regulation that requires that states pay managed care organizations an “actuarially sound rate.”

However, the regulation delegates the decision of what is an “actuarially sound rate” to a private organization, the Actuarial Standards Board, which sets practice standards for private actuaries.

Ignoring the statutory exemption from paying the fee that was provided to the states in the Obamacare law, the Actuarial Standards Board enacted a rule stating that the “actuarially sound rate” paid by the states to their Medicaid-managed care organizations must include their portion of the health insurance providers fee.

The Center for Medicare & Medicaid Services refused to approve any state contract that did not comply with this requirement.

We are talking substantial sums of money here. According to the judge in this case, Texas alone appropriated $244 million to pay this fee in fiscal years 2016 and 2017. Other states in the lawsuit “likewise provide Medicaid to millions of their citizens at the cost of a considerable portion of their annual budgets.”

O’Connor found that over “the next decade, the federal government will collect between $13 and $14.9 billion” from all 50 states paying the fee. According to the IRS, Congress placed a moratorium on the fee for 2017 and 2019, but not for 2018. So the fee remains on the books.

While the court found that the health insurance providers fee, which O’Connor labeled a “tax,” is constitutional, the regulation issued by the Centers for Medicare & Medicaid Services that delegated “to a private entity the authority to decide who must pay this tax” violates the non-delegation doctrine.

O’Connor goes through a very interesting and illustrative history of the non-delegation doctrine, which “remains a cornerstone in the constitutional architecture of free government” to the frustration of “modern liberals.”

In essence, the non-delegation doctrine “stems from the very first clause of the Constitution, which reads: ‘All legislative Powers … shall be vested in a Congress of the United States.’” Thus, Congress cannot delegate or transfer to others its “essential legislative function.”

This “structural feature of the Constitution … exists to protect democratic deliberation, executive accountability, and individual liberty.” The framers “enshrined” this doctrine in “our charter because the framers, drawing from the deep wells of their Western heritage, recognized it as an axiom of just government.”

The most difficult determination of whether the non-delegation doctrine has been violated is when courts are reviewing the actions of federal agencies under their authorizing statutes. In those cases, “courts must distinguish between unlawful delegation of legislative power and lawful delegation of policy judgement,” according to O’Connor. It “is inherently difficult to draw this distinction and identify an unlawful legislative delegation by Congress to an executive agency.”

However, this case does not present such a dilemma concluded O’Connor because here, the power to determine whether a tax should be imposed was delegated to a private party. In such cases, “there is not even a fig leaf of constitutional delegation.”

The legislative power of Congress has been passed “to an unelected agency, and then by the agency to an unelected private entity.” And that “private entity is not subject to term limits, appropriations, impeachment, or removal, and neither holds a commission nor takes an oath to uphold the Constitution.”

In addition to this constitutional violation, O’Connor found that the imposition of this tax violated the Administrative Procedure Act, which governs the promulgation of rules and regulations by federal agencies.

According to O’Connor, the tax went beyond the statutory authority of the Obamacare law: “there is no genuine dispute of material fact that [the regulation] is ‘in excess of statutory jurisdiction, authority, or limitations, or short of statutory right.’”

This ruling wipes out the ability of the federal government to collect billions of dollars from the states that it has been using to subsidize Obamacare. And this is not the end of the story.

A new lawsuit has just been filed—in the same federal court where O’Connor presides—by 20 states alleging that Obamacare is no longer constitutional because the tax cut bill signed into law by President Donald Trump on Dec. 22, 2017, eliminated the tax penalty imposed on individuals who don’t comply with the individual mandate.

Because the Supreme Court only upheld Obamacare as constitutional based on the taxing authority of Congress, the states argue that its constitutional underpinning is gone.

>>> Without the Individual Mandate’s Tax, Obamacare Should Fall Apart in Court

Piece by piece, year by year, Obamacare is slowly being taken apart by both litigation and legislation like the 2017 tax cut bill that eliminated the tax penalty on the individual mandate.

But members of Congress would do well to return to their abandoned effort to repeal Obamacare in its entirety in order to provide Americans with a replacement that supports their needs.