Obamacare Bailouts Will Not Save Money and Lower Premiums, Despite Contrary Claims 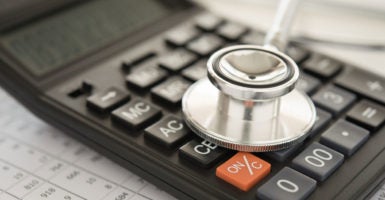 Bailing out Obamacare will lead to future bailout requests from insurers, at the expense of taxpayers. (Photo: utah778/Getty Images)

Congress appears poised to bail out Obamacare with new federal money in the omnibus package next week.

Advocates of this bailout say it’s a good idea that will lower premiums and either “pay for itself” or “lower spending.” These claims are based on estimates that rely on questionable assumptions.

Lawmakers should not be fooled into thinking that throwing money at a problem—Obamacare—will somehow fix it.

Here are three dubious assumptions that form the basis of the Obamacare bailouts argument.

Questionable Assumption #1: We need a bailout because congressional Republicans repealed the individual mandate, which will cause premiums to increase.

The idea that a bailout will cause premiums to go down is based in part on a Congressional Budget Office estimate, which assumes repealing the individual mandate tax penalty will result in 5 million people dropping individual market insurance—producing a 10 percent increase in premiums for non-group coverage.

That is implausible. To believe this projected increase, you have to believe that nearly one-third of the entire non-group market (17 million enrollees) is buying coverage only to avoid a government fine.

Yet, data reported by the IRS indicates that the mandate hasn’t had much effect in forcing the unwilling to buy coverage. In both 2015 and 2016, there were 11 million tax filers who claimed an exemption from the mandate, and in 2016 another 4 million simply went without coverage and paid the fine.

In short, if the Congressional Budget Office has overestimated the extent to which the mandate forced healthy people to buy coverage—as most outside experts believe it has—then the repeal of the mandate will not result in large premium increases. That, in turn, means Congress is trying to solve a phantom problem.

Questionable Assumption #2: We need a bailout to save the government money—so Congress should appropriate cost-sharing reduction subsidies.

But this cost estimate is implausible because it appears to be largely derived from another, highly speculative assumption. Specifically, the Congressional Budget Office assumed that the resulting larger Obamacare premium subsidies would induce employers to dump 3 million more workers into the exchanges and pay fines for not covering them—significantly increasing the number of people receiving Obamacare premium subsidies (above the current 8 million individuals).

Yet, since the implementation of Obamacare in 2014, there has been little to no evidence that large employers subject to the law’s employer mandate have dropped coverage.

Therefore, it’s highly unlikely that the federal government will actually spend most of the additional money projected by the Congressional Budget Office if Congress does not appropriate separate cost-sharing reduction subsidies.

Furthermore, even if the Congressional Budget Office’s projections proved accurate, appropriating funding for cost-sharing payments would simply bring federal spending back down to the baseline level. In other words, there are no “savings” to be had from appropriating these payments.

Advocates of Obamacare bailouts point to recent analysis by the consulting firm Oliver Wyman. This article reports that Americans would enjoy large premium decreases under a Senate proposal to provide $30 billion over three years in new federal funding for Obamacare reinsurance.

Their estimates are implausible for two key reasons.

First, the true cost to the federal government of new reinsurance funding is likely to be $45 to $50 billion—not $30 billion. To get the projected large premium reductions, Oliver Wyman had to assume that states would also get additional federal funding in the form of “pass through savings” through the use of Section 1332 waivers.

As the authors explain: “Lower premiums result directly in lower premium subsidies, and under a section 1332 waiver, these savings that would otherwise accrue to the federal government can be used by the states to provide additional reinsurance.”

In other words, Oliver Wyman assumes that, despite premiums going down, the federal government would continue to fund state 1332 waivers based on the cost of paying larger subsidies on higher premiums.

Second, the authors acknowledge that their estimate of significant premium reductions rests on an unrealistic scenario:

In our modeling, we are presuming that states will take advantage of these pass-through savings in 2019. In reality, states that have not already begun working on a waiver will be challenged to get a 1332 waiver filed and approved under the current regulatory regime in time to impact 2019 premiums.

What does this mean? Even under a best-case scenario, the large premium reductions projected by the Oliver Wyman modeling wouldn’t happen in most states for at least another year.

While GOP members think they can pay for this bailout with “savings,” they’ll actually be creating a new channel for Obamacare funding. This move will only result in increased federal spending—not savings.

Bailouts today set up the federal taxpayer to become an ATM for insurers with never-ending requests for taxpayer money every time premiums rise. And their requests will likely increase in price to taxpayers.

The Congressional Budget Office is in the business of making projections, but what it doesn’t account for are broken promises. After eight years of pledging to repeal Obamacare, Republicans are on track to fall for the faulty estimates circulating around Washington and hand over billions to insurance companies.  This even in the face of new polling that shows the majority of Americans oppose Obamacare bailouts, even if they cause premiums to go down.

Instead of chasing after temporary fixes, Republicans need to change gears and focus on creating permanent solutions that will help Americans find the policies they need at affordable prices.