This Man Wants to Build 2 Houses. California Regulations Have Stonewalled Him for 20 Years. 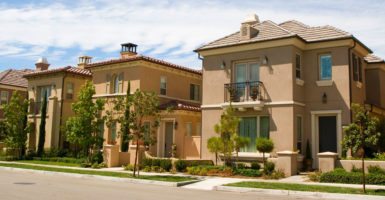 California has some of the most onerous housing regulations in the country. (Photo: MCCAIG/Getty Images)

Thomas Mahon never thought it would take 20 years to build two houses in California. But that’s exactly how long it’s taken—and his legal fight isn’t even over.

His fight shows how overregulation is driving the state’s current housing crisis. And some state politicians are promising to make things worse. The upshot is that other states can learn from California’s big-government failures and welcome ex-Californians with open housing markets.

State politicians know that building new homes is too costly, but they disagree over policy solutions. Some offer less regulation, while others promise more (including new housing quotas, more subsidized units, and reviving “redevelopment agencies” that the state eliminated in 2011 to save money). Less regulation would likely attract more investment for affordable housing, but a better bet would involve changing the state’s approach to property rights.

Mahon first applied for the necessary building permits in February 1999.

After a state court of appeals ruling this month, he is still seeking the permits.

One might wonder how, even in California, is that possible?

The short version is this: the sizes of his proposed houses are too big for some of his neighbors’ tastes, and he is not, so to speak, giving an inch. The long version, though, is that state and local law has created a virtually endless gantlet of red tape that may save the public from oversized houses, but also wastes time and money while property is left undeveloped.

In 1999, when Mahon first sought his permits, some members of the public and elected community advisers formally objected because, as a state court of appeals noted, “the proposed homes were visually bulky and too large in scale, given the existing character of the community.”

For several years, Mahon worked to tweak one of his home plans, yet he was persistent, if not obstinate, in refusing to cave in to public pressure to downsize. According to the appellate court, Mahon waited years for his house plans to be turned down, pending further proceedings.

In 2009, a group called Montara Neighbors for Responsible Building claimed that under state subdivision rules, at least as those laws had been interpreted in the courts, Mahon owned only one 10,000-square-foot lot.

Local zoning rules allow for only one home per lot.

In 2011, the state superior court agreed with the Montara Neighbors group.

And in 2017, a 5-to-3 majority of the U.S. Supreme Court (with Justice Neil Gorsuch not participating) ruled in Murr v. Wisconsin that a family’s two adjacent lots could be combined by operation of local zoning regulations without creating a “taking,” for which the Takings Clause of the Fifth Amendment to the Constitution would require “just compensation.”

As bad as that case is for property rights, that is now the law in California. So, Mahon might have to say goodbye to house No. 2.

A trial court suggested that the “cavalcade of delays and errors” that has prolonged a final decision on Mahon’s permits could have ended at any time, had he only redesigned his home to be smaller.

But Mahon “chose to instead try to get approval of his changes without significant reduction in the size of the project houses,” despite “strong opposition and political pressure against him building larger homes on his lot(s).”

Apparently, he should have known better.

This month, a state court of appeals wrote that his “reasonable expectation that he could build some type of house on his property does not mean he could reasonably expect to build two homes of the particular size and scale he proposed.”

That may be fair enough. No one wants to live next to a monstrosity that blocks light and views.

But California is in no position to let land that could provide housing go undeveloped for decades.

That’s where the rubber meets the road in this case.

The court of appeals wrote that “government power to regulate land use is so important that no vested right to a particular use arises until the government has approved that specific use.”

The county asserted on appeal that “there has been no final decision regarding the scope of the development that will be allowed on [Mahon’s] property.”

Accordingly, the court ruled that until the local powers-that-be do make a final decision about Mahon’s permits, he must continue to languish in an administrative rigmarole.

From San Mateo’s endless aesthetic-review process to a Los Angeles rule that developers must build two parking spaces at $27,000 or more a pop for each new apartment unit, California’s entire housing market seems to be drowning in red tape.

Borre Winkle at the Building Industry Association of San Diego has argued that as much as “40 cents on the dollar of production of housing goes to regulations alone.”

That locks many middle class and poor individuals out of affordable housing.

Since 2010, California has lost 2 million working-age residents; an additional 10 percent of residents have considered leaving owing to prohibitive housing costs.

As bad a problem as the state has created for itself, California lawmakers may not be ready to stop writing new housing regulations or to promote more efficient land development.

But other states can compete on policy terms, if they aren’t already, to attract workers who are fleeing California’s big-government chokehold on housing.

Texas, for example, which is more protective of property rights, has a far more affordable median home value (about $175,200) than California (about $529,900), as well as an overall lower cost of living and significantly lower overall tax burdens.

Other state lawmakers should learn from California—and specifically, the dizzying timeline in Mahon’s case—the lesson that James Madison conveyed in the Federalist Papers (No. 10): that “a pure democracy, by which I mean a society consisting of a small number of citizens, who assemble and administer the government in person, can admit of no cure for the mischiefs of faction.”

But “such democracies have ever been spectacles of turbulence and contention; have ever been found incompatible with … the rights of property; and have in general been as short in their lives as they have been violent in their deaths.”