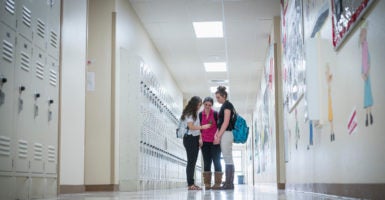 Students and teachers at Utah schools have access to an app that allows users to report threats of violence and seek help from crisis counselors.

“‘Credible’ ranges on a scale from imminent to yes, we think there are some means, motive, and ability to accomplish the threat,” Reyes said. “It can range anywhere from a hand-held weapon to a bomb or other types of threat.”

Called SafeUT and initiated in 2016, the app is downloaded to smartphones and other mobile devices. It allows students, teachers, or other users to start a chat with a crisis counselor by phone or electronic text, or to submit a tip about a possible threat.

“The powerful part of this is that on the other end of the line, it’s not a voice answering machine, it’s not a calling tree, it is someone who will text back immediately who’s a trained professional,” Reyes said.

The professionals, trained in behavioral and mental health, are experts from the University of Utah’s University Neuropsychiatric Institute who “work staffing the SafeUT lines 24/7,” he said. “And we work with them on funding, they are part of our state system.”

The Utah Legislature funded the app for use in public and private schools, kindergarten through 12th grade, in collaboration with the University Neuropsychiatric Institute, the Utah State Office of Education, the Utah Office of the Attorney General, and the Utah Anti-Bullying Coalition.

Reyes said he thinks the technology of SafeUT could have helped stop the 19-year-old with a rifle who killed 17 and wounded 17 others Feb. 14 at a high school in Parkland, Florida.

“The tragedy in Florida is just horrible,” the Utah attorney general said, “and I don’t want to sound like we are second-guessing anybody or any agency. But I do think that if young people, including this particular young person, may have had more help and attention from some experts earlier in his life, he might have had a better chance to be more productive and less destructive.”

The confessed shooter, Nikolas Cruz, 19, was a former student at the school, Marjory Stoneman Douglas High School. He could have been deterred by technology such as the SafeUT app, Reyes said. “We created an opportunity for youth to text in if they are in a mental, physical, [or] emotional crisis,” Utah Attorney General Sean Reyes says. (Photo: Sean Reyes Facebook)

“How does this tie back into school safety?” the Utah attorney general asked. “You have the immediate component of 86 threats that were intercepted, thwarted, because we got real-time information about a physical threat, somebody making a threat to other students or the school at large.”

Threats could include tips such as an overheard conversation, a post on social media, or a personal challenge faced by a student, he said.

According to the University of Utah, the app has reached 75 percent of Utah’s students and receives an average monthly ratio of 819 tips and 1,493 chats.

The University Neuropsychiatric Institute refers threats deemed credible to local police departments, and no statistics on follow-up are available, a spokeswoman for Reyes said.

Aside from the convenience of the software application, which can be downloaded from the app store and used 24/7, the big advantage is the availability of crisis counselors to respond to the messages, Reyes said.

“To me, some of the magic that is happening is that we also created an opportunity for youth to text in if they are in a mental, physical, [or] emotional crisis,” he said.

Reyes said Utah officials settled on an app rather than a crisis hotline to gear their outreach to what students would be more comfortable with.

“We did some research and talked to students and teenagers,” he said, “and figured out very quickly that they never called the hotline numbers because they never called anybody. They just don’t call, they text and use other social media for interaction.”

The app is an optimal tool to address issues students struggle with before those issues escalate to security threats, he said.

Reyes said he hopes more students will use the app for access to resources that could help them avoid “becoming destructive” toward themselves or others.