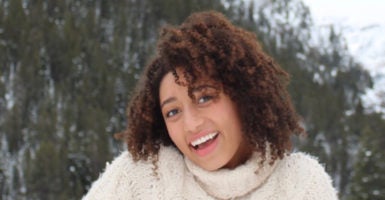 “I'm not a doctor and I'm not a politician, and so I am just a student trying to help another student and I care,” Alessa Love says. (Photo courtesy: Alessa Love)

While students across the country protest school shootings Wednesday with walkouts, one senior says her school in Utah is encouraging students to “walk up, not out” and show an act of kindness.

“I feel like the media tends to focus a lot on the anger, hurt, and destruction of our youth in society,” Alessa Love, who attends Westlake High School in Saratoga Springs, told The Daily Signal in a phone interview.

“And I feel it would be nice to have some healing and to show some kindness and help students not feel alone or upset or hurt,” Love, 18, said, “because actually we might be able to stop the violent acts before we experience them.”

Those participating in the walkout alternative are using the hashtag #WalkUpNotOut on social media to promote the idea.

In a Facebook post Monday, Westlake High asked students to reach out to their peers by doing things such as walking up to other students who sit alone at lunch and inviting them into a group, or approaching someone who causes a disturbance in class to ask about how he or she is doing.

The school encouraged such actions as an alternative to leaving the building to protest school shootings and other crimes committed with guns.

“Frederick Douglass said, ‘It is easier to build strong children than to repair broken men,’ so just going up and talking to someone and being that friend just makes a huge difference,” Love told The Daily Signal.

Students across the country organized National Walkout Day for Wednesday to demand solutions one month after the Feb. 14 massacre at a high school in Parkland, Florida, when a 19-year-old with a rifle killed 17 and wounded 17 others. They have used the hashtag #NationalWalkoutDay on Facebook, Twitter, and other social media.

“I’m not a doctor and I’m not a politician, and so I am just a student trying to help another student and I care,” the Utah student said. “I just feel like if we can save a student from [violent] thoughts or violent acts, we can save many more from being victims. And I just feel it’s always important to be that friend and to be that person.”

Alessa Love is the eldest of the three children of Rep. Mia Love, R-Utah, and husband Jason Love.

Westlake High has about 4,000 students and the school leadership hopes all of them will participate, she said, adding that students should take the challenge beyond high school.

“I just think that it can carry throughout your life, to be that friend and encourage one another and help others before they have those violent acts and they go seek a gun,” Love said. “Just to be that friend.”