Russia’s Use of Nerve Agent Calls for Unified Western Response 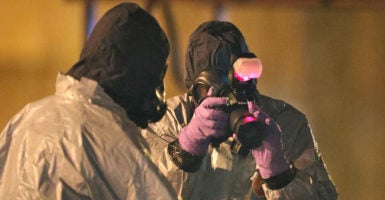 Last week, according to experts at the United Kingdom’s premier defense laboratory, the world witnessed the debut of a new and extraordinarily deadly weapon—the chemical agent known as “Novichok.”

According to British Prime Minister Theresa May, Novichok was used in the March 4 assassination attempt on former Russian intelligence officer Sergei Skripal and his daughter Yulia. Skripal, Yulia, and a responding police officer, Sgt. Nick Bailey, all remain in critical condition from the attack.

Nerve agents such as VX, which was believed to have been used to kill Kim Jong Un’s half brother, Kim Jong Nam, are among the most deadly substances known to man, but Novichok agents are known to be deadlier still.

They reportedly are five to eight times more toxic than VX and are not detectable with standard chemical weapon detectors. Just 10 milligrams (0.00035 oz) of VX nerve agent on the skin is enough to cause a horrible death.

Not only does it reportedly take less Novichok agent to cause death, but it can be manufactured and disseminated as a fine powder, in addition to the typical form of nerve agent, liquid. Only Russia is known to ever have manufactured Novichok nerve agents.

The existence of Novichok agents heretofore was only known through inadvertent disclosures by Russian scientists and defectors. They have never been used in conflict. Russian statements concerning their chemical warfare stockpiles, required by the Chemical Weapons Convention, have consistently omitted any mention of Novichok agents.

This is far from the first time the Russians (or the Soviets, before 1992) have used new and exotic means to carry out assassinations in the United Kingdom.

In November 2006, Russia used a rare radioactive element, polonium-210, to assassinate former spy Alexander Litvinenko in London, lacing his tea with the poison. Litvinenko died a horrible death. Polonium had never been used as a poison before.

Stranger still, in 1978, Bulgarian dissident Georgi Markov was killed by a poison dart loaded with ricin fired into his leg by an individual carrying an umbrella. The Soviet KGB is widely believed to have been involved. Again, this was the first time we know of that ricin was successfully used as an assassination weapon.

The prime minister has called the assassination attempt on Skripal  a “reckless and despicable act” and has promised significant consequences for Russia. This is appropriate, and these should be joined by Europe and the U.S. as well.

But the event itself is anything but surprising. Over the years, whether in previous assassinations, Crimea, Syria, or Ukraine, Russia has shown consistent disregard for international law, norms, and rules.

Breaking from the recent past, the Trump administration’s new national security strategy takes a clear-eyed view of the threat from Russia, stating that Russia seeks to “shape a world antithetical to U.S. values and interests” that “aims to weaken U.S. influence in the world and divide us from our allies and partners.”

By standing with the U.K. in the imposition of new punishments and sanctions, and by continuing to invest in peace through strength, the U.S. can and will counter Russian efforts to subvert the international order.