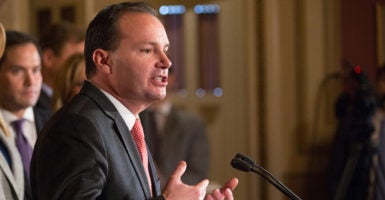 Sen. Mike Lee has introduced a religious freedom bill that is designed to protect Americans who believe in traditional marriage from punishment by the government.

“What an individual or organization believes about the traditional definition of marriage is not—and should never be—a part of the government’s decision-making process when distributing licenses, accreditations, or grants,” Lee, R-Utah, said in a statement provided to The Daily Signal.

The newly introduced version is different from the original version, introduced in 2015, in that it also includes protections for “those who support any federal legal definition of marriage between two people, including same-sex marriage,” CNN reported.

Lee says his bill, reintroduced Thursday, would help protect Americans from being penalized for their religious beliefs.

“The First Amendment Defense Act simply ensures that this will always be true in America—that federal bureaucrats will never have the authority to require those who believe in the traditional definition of marriage to choose between their living in accordance with those beliefs and maintaining their occupation or their tax status,” Lee said.

Groups on the left have attacked the bill. The American Civil Liberties Union’s Ian Thompson, a legislative representative, said the bill would promote “taxpayer-funded discrimination.”

The Human Rights Campaign’s Sarah Warbelow told CNN of the change to the legislation: “It appears to be a false attempt or a failed attempt to make this legislation constitutional by making it seem they’re not just targeting LGBTQ people.”

Masen Davis, CEO of Freedom for All Americans, which works to “secure full nondiscrimination protections for LGBTQ people nationwide,” was similarly negative.

“Any changes made to this bill can’t hide its true animus: to legalize discrimination against LGBTQ people,” Davis told CNN.

Emilie Kao, director of the Richard and Helen DeVos Center for Religion and Civil Society at The Heritage Foundation, told The Daily Signal in an email that she believes the legislation would provide protection for those who believe in traditional marriage as well as those who believe differently.

“Sen. Lee has introduced much-needed legislation to protect the freedom to act according to the view that marriage is between one man and one woman,” Kao said. “Even though the Supreme Court described this view as ‘decent and honorable’ in Obergefell v. Hodges, we have seen a wave of litigation against people who hold a belief that has been shared by people around the world for millennia. In a pluralistic society, there should be room for civil disagreement on marriage.”