Trump Has Agreed to Meet With Kim Jong Un. Here’s What He Needs to Do Now. 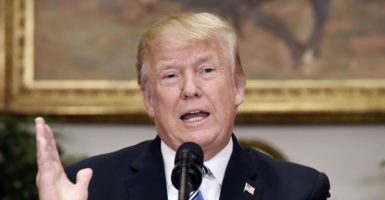 President Donald Trump would be the first sitting U.S. president to meet with a North Korean leader. (Photo: ABA/Newscom)

President Donald Trump’s swift decision to accept a surprise summit invitation from North Korea is yet another stunning development in a whirlwind of diplomatic breakthroughs since the beginning of the year.

Within a few short months, the Korean Peninsula has shifted from a seemingly inevitable military clash to being on the cusp of a momentous, first-ever meeting between U.S. and North Korean leaders. Pyongyang has seemingly reversed its long-standing resistance to abandoning its nuclear arsenal.

But the regime’s offer comes with heavy strings attached, and merely reflects a willingness to return to square one of previous negotiations. All past attempts at diplomacy with North Korea have failed, so there is good reason to be skeptical and wary this time around.

It is difficult to conceive of a higher currency in the diplomatic realm than a first-time U.S. meeting with a North Korean leader—yet Trump spent that currency without leveraging any concessions from Pyongyang, such as the release of three Americans currently being held captive.

As the administration prepares for the summit, it needs to play a more strategic game rather than focusing on historic “Nixon going to China” optics.

The recent pivot toward diplomacy began when North Korean dictator Kim Jong Un extended the usual olive branch to South Korea during his annual New Year’s Day speech. Fearful of a North Korean provocation or even an attack during the Winter Olympics, South Korean President Moon Jae-in eagerly grabbed ahold of it.

Once inter-Korean discussions began, however, the objective shifted from merely preventing provocations toward broader efforts at reducing tensions and advancing inter-Korean reconciliation.

During the Olympics, the U.S. counseled its ally to move forward cautiously and only after lengthy preparations.

The Trump administration should now take its own advice before it is seduced by the same sirens’ song. Trump’s decision to accept Kim’s invitation was impetuous. Only hours before the decision, Secretary of State Rex Tillerson had commented, “We’re a long way from negotiations, we just need to be very clear-eyed and realistic about it.”

Trump’s supporters will argue that his business acumen and negotiating prowess will carry the day in a mano-a-mano match with the North Korean leader. But such claims are disturbingly reminiscent of the end of the Clinton administration, when some officials proclaimed that the president’s charm was so strong that it would enable the U.S. to achieve all of its objectives in a direct meeting with then-North Korean leader Kim Jong Il.

Thankfully, wiser heads prevailed. After U.S. diplomats determined that Pyongyang was unwilling to discuss the parameters of a missile agreement, President Bill Clinton declined the North’s invitation for a summit photo op.

President George W. Bush also never considered a summit with North Korea, despite years of engagement in six-party talks negotiations during his term. Even when Moon received his summit invitation at this year’s Olympics, he deftly demurred and used envoys to first negotiate North Korean concessions. Only then did he to agree to a meeting.

Pyongyang has not yet publicly affirmed South Korea’s portrayal of that meeting with Kim. Instead, North Korean media provided a more limited readout of the meeting, omitting any mention of its pledge to denuclearize. Just days earlier, a North Korean official had declared that his country was “compelled to possess [a] nuclear deterrent in order to protect its sovereignty and the security of its nation from the harsh hostile policy and nuclear threat of the U.S.”

The South Korean delegation indicated that Pyongyang’s summit offer was conditioned upon the guaranteed safety of its regime and the removal of military threats against the North. This is in line with past demands that North Korea has made over the years. Among those many demands are: withdrawal of all U.S. troops from South Korea; annulment of the U.S.-South Korea defense treaty; ending the U.S. extended deterrence guaranty; and removal of all U.S. and United Nations sanctions.

What the US Should Do

The president has two months to prepare for this summit, yet his staff remains hampered by critical vacancies and a roster that is thin on Korean expertise. Here are six things his administration should do:

Move quickly to fill policymaker vacancies—particularly the U.S. ambassadorship to South Korea and the State Department special representative for North Korea policy. Trump should also appoint a senior envoy to coordinate U.S. policy on North Korea and serve as a high-level interlocutor.

Put together an agenda for the summit that addresses U.S. and allied security concerns and clearly lays out the end goal being the complete, verifiable, and irreversible denuclearization of North Korea. Meeting with Kim should be conditioned upon his agreement to this agenda. Past diplomatic efforts with North Korea have failed due to short, vaguely worded agreements that allowed both sides to claim different interpretations as to what was agreed upon, as well as faulty measures for verifying the agenda.

Washington should reject any calls for reducing sanctions on North Korea in order to “improve the atmosphere for negotiations,” as the U.S. has frequently done in the past. The international pressure campaign is working, and sanctions must be maintained and strengthened as long as Pyongyang continues the behavior that triggered them in the first place. Indeed, the North Korea Sanctions and Policy Enhancement Act Section 401 allows the U.S. to suspend sanctions for up to one year only if North Korea has made progress on several stipulated issues.

4. Go ahead with planned military exercises.

The U.S. and South Korea should stick to their plan to engage in the annual Foal Eagle/Key Resolve military exercises, which were postponed so as to not conflict with the Olympics and Paralympics. These exercises play an important role in maintaining allied deterrence and defense capabilities, and should not be sacrificed as diplomatic bargaining chips.

While denuclearization remains the key objective, the U.S. should propose discussions on confidence-building and security-building measures in order to increase transparency between North Korean and allied military forces and reduce tensions on the Korean Peninsula. These measures would include both military and nonmilitary components.

To take a page from North Korea’s playbook, Washington should call upon Pyongyang to demonstrate its commitment to progress by releasing the three U.S. captives currently in North Korean possession and by announcing its return to the Korean War armistice, the 1992 inter-Korean denuclearization accord, and Korean agreements of nonaggression.

The diplomatic path with North Korea is littered with many past failures. That is not to say we shouldn’t try again, but we should be cautious in trusting reports that the regime has reversed its policies.

Pyongyang has repeatedly dashed the hopes of those pressing for more engagement. The regime habitually follows perceived movement by issuing threats, cancellations, and demands.

Even as the U.S. and North Korea resume engagement, Pyongyang will continue to enhance and refine its missile and nuclear capabilities. North Korea is nearing the ability to target the U.S. homeland with nuclear weapons, which some have argued would justify U.S. military action.

There is reason for optimism heading forward, but the U.S. must keep its eyes open, its shield up, and its sword sharp.