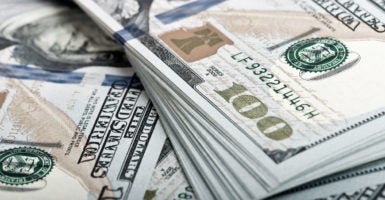 Under the Butch Lewis Act, Congress would bail out a number of underfunded private-sector pensions. (Photo: PaulPaladin/Getty Images)

Making loans to private individuals or entities has no foundation in the Constitution, but that doesn’t stop government from using lending to encourage desirable behaviors, such as investing in a college education or buying a home.

But one proposal before Congress, introduced at the urging of private-sector unions and employers, goes further, calling for taxpayers to make loans to private, union-run pension plans.

These would not be any ordinary loans, either. Instead, they would be taxpayer bailouts under the guise of government loans.

Policymakers should ask: What desirable behavior is being encouraged here? Do we want government to encourage private employers and unions to promise workers more than they can afford and then fail to set aside the money necessary to meet those promises? Because that’s exactly what this proposal would do—encourage the same reckless behavior that contributed to the $500 billion shortfall faced by roughly 1,300 multiemployer pension plans today.

Unlike loans made in the private sector, which happen only where a legitimate expectation of repayment (and a risk-compensating interest rate) can be established, loans to insolvent pension plans would have a high expectation of default.

The Butch Lewis Act—a proposal to bail out private-sector pensions through loans as well as direct cash assistance—acknowledges the high probability of default by stipulating that pension plans that have trouble repaying their loans after 30 years of interest-only payments will be eligible for forgiveness or alternative repayment plans.

A loan with a zero-consequence default option for the borrower is not a loan—it’s a bailout.

But it’s not just defaults that taxpayers need to be concerned about. There’s also the cost of providing highly subsidized, low- or no-interest loans for 15 to 30 years, as well as the risk that plans will increase—rather than decrease—their unfunded liabilities over the course of their loans.

But those costs won’t be apparent in the official government score because the Congressional Budget Office is required to score loans under the assumption that insolvent pension plans are essentially riskless borrowers.

In reality, loans to insolvent pension plans could cost taxpayers hundreds of billions of dollars. The most liberal proposals—which supplement loans with direct cash assistance—could cost more than the entirety of multiemployer pensions’ half-trillion-dollar shortfall.

That’s because bailouts would encourage even healthy pension plans to overpromise and underfund benefits, leaving taxpayers with the tab. A bailout for private, union-run pensions would signal the federal government’s willingness to also bail out state and local government pensions, which would encourage them to continue the practices that contributed to their current $6 trillion funding shortfall.

Advocates rely on two misleading arguments to convince policymakers of the need for a federal bailout.

First, they claim that helping private pension plans themselves will save taxpayers money by preventing the Pension Benefit Guaranty Corp., an independent federal government agency, from becoming insolvent.

But this corporation is not a taxpayer-financed entity, so taxpayers are not on the hook for its shortfalls. Furthermore, covering 100 percent of private pensions’ promises through loans or bailouts cannot cost more than covering only a portion of them through the corporation.

Second, private unions and employers seeking pension bailouts argue that the economic contagion effects of pension failures would be tremendous—in other words, that union-run pensions are too big to fail.

Those estimates are not only massively overstated (implying, as much as a 50-for-1 return on pensions bailouts), but they completely ignore one side of the equation—a dollar taken from a future taxpayer is no less valuable than a dollar not received in pension benefits today.

Coping with roughly $500 billion in private union pensions’ unfunded promises will not be easy. There are ways to minimize losses to workers who have earned pension benefits and protect taxpayers from paying for private pensions’ broken promises.

None of these actions provide a costless cure-all, but they offer more fair and rational solutions that don’t treat taxpayers as guarantors of private-sector promises or set the stage for even more mismanagement and reckless behavior.