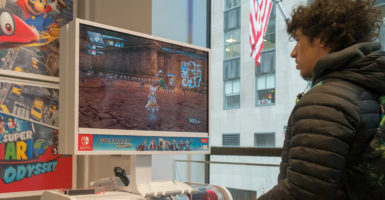 Lawmakers are taking another look at violent video games as they seek to make schools safer. Here, a game lover tries out a Nintendo Switch console Dec. 30 in New York's Rockefeller Center. (Photo: Richard B. Levine/Newscom)

President Donald Trump met Thursday with representatives of the video game industry to discuss the impact of violent games as he advocates ways to make schools safer.

“For a warped mind that is either evil or troubled, we have to ask ourselves, what kind of impact does that have?” @BrentBozell says.

The meeting came three weeks after a 19-year-old with a rifle killed 17 and wounded 17 more at a high school in Parkland, Florida.

In many mass shootings, such as the Sandy Hook Elementary School massacre in Connecticut and the Columbine High School shooting in Colorado, a common denominator was that the shooters were “violent video game fanatics,” said Brent Bozell, president of the Media Research Center, who was part of the meeting.

“They wanted to protect their industry and did a very eloquent job in defending their industry, pointing to a study here and a study there to tell you your eyes are lying when you see violence in video games,” Bozell told The Daily Signal in an interview after the executives met with Trump.

News reports, citing public records in Florida, said the Parkland shooter, Nikolas Cruz, threw his mother against a wall for taking away his video games. Classmates said Cruz would play video games for 12 or 15 hours a day.

CNN reported last month that a study by a Michigan State University professor, using survey data from more than 6,000 middle school students, found no correlation between video games and violent behavior. However, in a 2015 policy statement, the American Psychological Association said research shows a link “between violent video game use and both increases in aggressive behavior … and decreases in prosocial behavior, empathy, and moral engagement.”

Trump demonstrated genuine concern about the problem, Bozell said, and asked many questions.

“So many of these games show a sniper hunting and brains splattering,” Bozell said. “For a warped mind that is either evil or troubled, we have to ask ourselves, what kind of impact does that have?”

One solution could be stronger warning labels about the graphic violence in video games, Bozell said, comparing the product to restrictions on liquor, tobacco, and pornography. He said he suggested during the meeting that the gamemakers show some of a game’s typical violence in TV commercials.

“If parents saw the ultraviolence of ‘Grand Theft Auto,’ they would bolt their door to prevent it from coming into their house,” Bozell said, referring to a popular series of games.

“As a mother, former teacher, and member of Congress, I am clearly concerned with violence in our schools,” Hartzler said in a public statement. “Parents need to know that their children are safe in school, and more importantly, students must feel safe in their learning environment.”

I appreciate the president’s efforts in bringing together groups of all kinds with the goal of finding solutions to the horrific acts of violence in our schools and society. I believe the solution to curtailing violence lies in an all-encompassing approach, focused on several different factors that may contribute to school shootings.

Discussions should not be limited to just video games and guns. The president’s approach of leaving no stone unturned is prudent, and similar meetings with the movie industry pertaining to gun violence on film should also be conducted.

Also present for the meeting were Melissa Henson, a mother who is active with the Parents Television Council, and retired Army Lt. Col. Dave Grossman, who has written about violent video games.

The White House issued a readout of the meeting Thursday evening, saying in part:

During today’s meeting, the group spoke with the president about the effect that violent video games have on our youth, especially young males. The president acknowledged some studies have indicated there is a correlation between video game violence and real violence.

The conversation centered on whether violent video games, including games that graphically simulate killing, desensitize our community to violence. This meeting is part of ongoing discussions with local leaders and Congress on issues concerning school and public safety and protecting America’s youth.