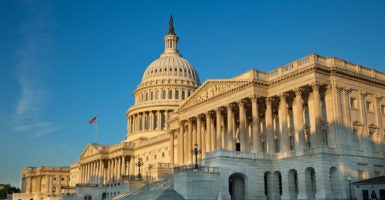 The "Clean Water Rule" dramatically expanded the range of bodies of water considered to be under federal jurisdiction. (Photo: drnadig/Getty Images)

Congress last year utilized the Congressional Review Act to get rid of many federal agency rules, most of which were prime examples of agency overreach.

Congress now needs to use the “power of the purse” in the upcoming omnibus appropriations bill to continue its efforts to rein in agencies and reassert its lawmaking power.

One time-sensitive and critical issue that should be front and center: the so-called “WOTUS” rule.

Even before the Obama administration’s 2015 Clean Water Rule—better known as the “Waters of the United States,” or WOTUS, rule—the Environmental Protection Agency and the U.S. Army Corps of Engineers had been trying to improperly expand their power under the Clean Water Act.

By developing an overbroad definition of “waters of the United States,” the agencies have been seeking to regulate almost every water imaginable and trample on property rights.

The WOTUS rule takes this federal overreach to a new level. For example, it would regulate certain man-made ditches and even regulate what most people would consider dry land.

Congress should expressly prohibit funding for implementation and enforcement of the WOTUS rule.

While courts are likely to block enforcement of the rule, the 6th U.S. Circuit Court of Appeals’ nationwide stay blocking the rule was recently lifted in response to the Supreme Court decision in National Association of Manufacturers v. Department of Defense.

To clarify, this Supreme Court decision focused on a technical procedural issue and in no way addressed the substance of the WOTUS rule. As a result of the stay being lifted, Congress needs to take action to ensure that the rule is never enforced.

Congress also needs to expressly require that the EPA and Army Corps of Engineers issue a new rule to define what is meant by “waters of the United States.” Such a clear congressional requirement would help eliminate many of the needless legal obstacles that are expected when the agencies move forward to withdraw the Obama-era WOTUS rule and develop a new rule.

Further, Congress should provide some guidance as to what waters are covered under the term “waters of the United States.” Ideally, there would be a detailed definition, but within the appropriations context, that might be difficult.

At a minimum, Congress should expressly state that any new rule should in no way be more expansive than that of then-Supreme Court Justice Antonin Scalia’s opinion in Rapanos v. United States, which provides a reasonable definition of “waters of the United States.”

It should also emphasize that states have the primary role in water regulation (as already expressed in the Clean Water Act) and that any waters covered should be directly and clearly connected to Congress’ commerce clause power under the Constitution.

By providing guidance as to the substance of any new rule, Congress would be reasserting some of its lawmaking power in defining “waters of the United States,” and merely ensuring that any definition is consistent with the will of Congress as evidenced by the plain language of the Clean Water Act.

This congressional guidance would help the agencies to defend any new rule in court (if the new rule were in fact consistent with the guidance). It would also help prevent future administrations from developing overreaching definitions of “waters of the United States.”

The WOTUS rule is widely opposed and must be addressed now so that a new rule can be developed without delay. It is also important to note that Congress through the Congressional Review Act did in fact pass legislation in 2016 to get rid of the WOTUS rule, only to have the legislation vetoed by President Barack Obama.

If Congress could use the Congressional Review Act again to pass legislation disapproving the WOTUS Rule, that would be better than using the appropriations process. That’s no longer possible, though, under that law because its deadlines have passed.

The recommended actions through the appropriations process are merely a way to achieve the same general objectives.

If Congress fails to address the issue, there will continue to be significant confusion and unpredictability, and extensive litigation, and it is even possible the WOTUS rule could be enforced.

That would be a disaster for property owners across the country and for those engaged in even ordinary activities, from families building homes to farmers trying to farm their land.

Congress shouldn’t pass up what might be the only chance this year to address the WOTUS issue.