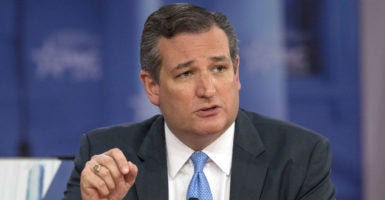 “The shooter in Sutherland Springs, he had a felony conviction and domestic violence conviction. Why was he able to buy a firearm?” Sen. Ted Cruz, R-Texas, asks. (Photo: Ron Sachs/dpa/Picture Alliance/Newscom)

Sen. Ted Cruz called out Democrats on CNN’s “New Day” Wednesday for filibustering the Grassley-Cruz bill back when Harry Reid was leading the Senate.

Cruz, R-Texas, argued if the bill had been adopted as law, it could have prevented certain shootings and kept firearms out of the hands of dangerous people.

“The shooter in Sutherland Springs, he had a felony conviction and domestic violence conviction. Why was he able to buy a firearm?” Cruz asked. “Grassley-Cruz would have fixed that. And here’s the more important piece, Grassley-Cruz would have also directed the Department of Justice to prosecute felons and fugitives who try to illegally try to buy guns. The Department of Justice hasn’t been doing that.”

“Let me ask one quick question. Grassley-Cruz got 52 Senators supporting it. Nine Democrats. The most bipartisan support of any comprehensive bill. But Harry Reid and the Democrats filibustered Grassley-Cruz even though it targeted criminals and could have perhaps prevented these attacks,” Cruz said.

“What I would ask is, next time you have a Democrat on, have you ever asked a Democrat why did you filibuster Grassley/Cruz, which targeted violent criminals and sought to put felons who try to illegally buy firearms in jail?” Cruz said. “We ought to be focusing on substance and actually getting the job done.”