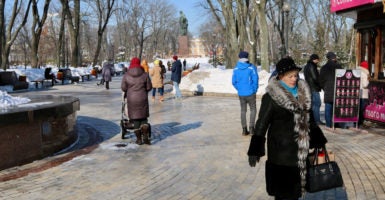 Similarly, on that day, the clouds had also somewhat parted over a forestalled gas war with Russia—albeit briefly.

“The period of gas blackmail of our country by Russia has already passed,” Ukrainian President Petro Poroshenko said Friday in Kyiv. “No one will put Ukraine on its knees.”

Going into the weekend, Russia’s national energy company, Gazprom, withheld the supply of $125 million worth of natural gas Ukraine had already purchased for March. Gazprom reportedly returned the advance payment, yet the canceled deal created an immediate 10 percent gas supply shortfall for Ukraine, the impact of which was compounded by a late-season cold snap that plunged much of the country into lethally frigid conditions.

Consequently, Ukrainian kindergartens, schools, and universities closed Friday and many remained closed through Monday amid fears that heating could be interrupted—nighttime temperatures dipped to minus 21 Celsius, or about minus 6 Fahrenheit, in some parts of the country Sunday.

In the past, Ukraine had siphoned EU-bound Russian gas from its pipelines to meet its domestic gas supply shortfalls when Russia turned off the spigot.

“Russia regularly uses energy as a weapon against its neighbors and is willing to use it as a tool to undermine European security,” Franklin Holcomb, a Russia and Ukraine analyst at the Institute for the Study of War, told The Daily Signal.

In the end, however, Ukraine met its heating needs—notably, without tapping into Russian gas transiting to the EU through Ukrainian pipelines. Despite a looming gas war with Russia, life went on as usual in Kyiv over the weekend, with many people out enjoying the clear, if still frigid, weather. (Photo: Nolan Peterson/The Daily Signal)

“We have fully provided transit of gas to the EU countries,” Poroshenko said. “The Russians hoped that Ukraine would start taking gas from transit. Keep dreaming. Ukraine is a reliable transit country, reliable state, and reliable partner.”

On Saturday, according to news reports, the EU countries of Poland, Slovakia, and Hungary rerouted gas to Ukraine along reverse flow pipelines. During the first four days of March, those three countries sent Ukraine 26.5 million cubic meters of natural gas, the Ukrainian Ministry of Energy and Coal Industry reported.

“I would like to remind you that Gazprom, in an insidious move, without warning amid abnormally cold weather, refused to fulfill its contractual obligations on gas supplies,” Naftogaz Chief Commercial Officer Yuriy Vitrenko wrote March 5 on Facebook.

Many Ukrainian buildings rely on central heating, in which gas radiators are moderated according to government heating schedules. Residents can supplement with electric heaters, but it’s often expensive to do so and puts a heavy drain on the power grid.

Consequently, with electric heaters making up the heating shortfall needs, electricity consumption spiked across the country over the weekend. As part of Kyiv’s crisis response, energy plants switched over from gas to oil. Also, with about half of Ukraine’s energy coming from nuclear power, the country’s nuclear power plants were reportedly operating at full capacity.

Since the breakup of the Soviet Union in 1991, Russia has often leveraged its power over Ukraine through the energy economy. Particularly, by cutting off gas supplies in winter.

Notably, in January 2009, Russia cut its gas exports to Europe through Ukraine, plunging the Continent into an energy crisis almost overnight. Russian President Vladimir Putin, who was then Russia’s prime minister, ordered Russian energy company Gazprom to cut its exports through Ukrainian pipelines by about three-fifths. The move came amid one of the lowest recorded winter temperatures in London in a century, sparking fears of a sharp increase in oil and gas prices.

Russia and Ukraine have been in a de facto state of war since early 2014. As Moscow’s proxy war in eastern Ukraine drags on, and the steady drip of casualties continues, energy independence from Russia has become a cornerstone of Ukraine’s national security strategy.

Ukraine had weaned itself off of direct Russian gas purchases in 2015, favoring supplies from the EU and rerouted Russian gas bought through EU proxies. Also, in pursuit of greater energy independence, Ukrainian lawmakers have also taken steps to boost the country’s domestic gas discovery and production.

This March was to be first month in more than two years in which Ukraine had directly purchased Russian gas—even if Ukrainian officials were reluctant to do so.

A December decision by the Arbitration Institute of the Stockholm Chamber of Commerce—an international dispute forum—ordered Naftogaz to buy up to 5 billion cubic meters of gas from Russia at market prices, the Ukraine Business Journal reported. On Monday, the skies were clear in Kyiv following a week of snowfall and gray skies. (Photo: Nolan Peterson/The Daily Signal)

In January, in accordance with the Stockholm court’s ruling, Naftogaz announced its plans to import roughly one-third of its natural gas from Russia in 2018—including the pre-purchase of $125 million worth of Russian gas for this March.

In an interview with the Financial Times, Poroshenko said the arbitration court’s order for Ukraine to buy Russian gas was “not widely acceptable among Ukrainian people, who are asking why we are buying from a country who undertakes aggression against Ukraine.”

“But we fulfill all the decisions of the court,” Poroshenko reportedly added. “We do exactly what the court prescribes.”

However, the agreement never left the ground in the wake of another ruling by the Stockholm arbitration court last week, which ordered Gazprom to pay $2.6 billion in debt to Naftogaz.

The court’s decision resolved a four-year legal battle in which Ukraine had argued that Gazprom owed years of transit fees for Russian gas that went through Ukrainian pipelines to European clients. Gazprom appealed the Stockholm court’s ruling.

“This is a real victory,” Poroshenko said of last week’s ruling. “This is a historic decision to protect the national and financial interests of Ukraine.”

When Russia balked at the arbitration court’s decision, Poroshenko threatened to seize Gazprom assets outside of Russia. Also, Naftogaz said it would fine Gazprom $500,000 a day until the $2.6 billion payout was satisfied.

Then, in a tit-for-tat reprisal, Gazprom canceled its gas contracts with Ukraine, raising the spectre of a heating crisis last weekend.

“Russia’s vindictive response to the Stockholm court ruling is designed to punish Ukraine for its victory in court, rather than target the EU directly,” the Institute for the Study of War’s Holcomb said.

The Federation Strikes Back

On Monday it seemed like Ukraine had successfully weathered the first round of Russia’s latest gas war—the heat was still on, and Russian gas was still flowing through Ukrainian pipelines to Europe.

But Gazprom struck again, announcing that day its intent to terminate gas transit contracts with Ukraine. In response, Naftogaz announced the closure of its representative offices in Moscow.

Russian transit gas is a $3 billion a year business in Ukraine, comprising roughly 3 percent of the country’s gross domestic product. For that reason, the loss of Russian gas transit contracts would be a body blow to Ukraine’s economy—and Europe’s energy security, as well.

Of that number, Gazprom used Ukrainian pipelines to deliver about 49 percent of its Europe-bound gas last year, according to Naftogaz reports. Overall, transit of Russian natural gas through Ukraine’s pipelines increased by 13 percent in 2017, topping out at 93 billion cubic meters—the highest level since 2011, Naftogaz said.

Brussels had pledged to cut the EU’s reliance on Gazprom gas when Russia’s military aggression against Ukraine began in 2014. Yet, the EU’s Russian gas imports have actually increased by 25 percent since 2014, and there’s little sign the bloc is set to wean itself off Russian gas anytime soon. Gazprom’s share of the European gas market will rise to 40 percent by 2035, industry reports forecast.

A special crane stacks pipes weighing several tons each that will be used for the construction of the Nord Stream gas pipeline in the Sassnitz-Mukran harbour in northeastern Germany, Dec. 6, 2016. (Photo: Jens Buttner/dpa/Picture Alliance/Newscom)

Thus, with Russian gas increasingly critical to the EU’s energy security, and with roughly half that gas supply transiting through Ukrainian pipelines, the latest Russo-Ukrainian gas war has re-stoked the debate over Russia’s controversial Nord Stream 2 and TurkStream pipelines—both of which bypass Ukraine.

Another planned Russian pipeline project known as TurkStream bypasses Ukraine through Turkey and the Black Sea.

U.S. and EU sanctions on Russia for its aggression in Ukraine have so far hampered financing for the Nord Stream 2 project, which is now a wholly owned subsidiary of Gazprom.

Yet, on its website, the Russian energy giant said Nord Stream 2 would be “completed on time and brought into operation before the end of 2019.”

Holcomb said Gazprom’s gas shutoff to Ukraine over the weekend “highlights the danger posed to all European states by Russia’s Nord Stream 2 and TurkStream projects.”

Other EU countries like Germany, however, are more supportive of Russia’s plans. In January, Germany green-lighted the construction of Nord Stream 2 through German waters, as well as its landfall in German territory.

“On energy security, Germany gets it wrong, and it gets it wrong in a way that hurts other EU member states,” A. Wess Mitchell, U.S. assistant secretary of state for European and Eurasian affairs, said in testimony to the Senate Foreign Relations Committee on Dec. 12.

Underscoring an internal rift within the EU over the Nord Stream 2 project, in November, Denmark’s parliament passed a law that could block the Russian pipeline from Danish waters due to foreign policy concerns.

“This comes against Germany’s wishes and needs for energy,” Fatima-Zohra Er-Rafia, a corporate consultant and geopolitical researcher, said of the Danish parliament’s decision.

“European diplomacy is failing and Russia knows it,” Er-Rafia told The Daily Signal.

Meanwhile, blocking Russia’s planned pipelines has risen to the top of Kyiv’s diplomatic docket. To that effect, on Monday, the Ministry of Ecology and Natural Resources of Ukraine joined German environmentalists in a lawsuit to block Nord Stream 2, and this week, Naftogaz announced it is opening an office in Germany.

Holcomb, the Institute for the Study of War analyst, said the U.S. should also do more to divorce Europe from its reliance on Russian gas, even if that puts the U.S. at odds with EU allies like Germany.

“The U.S. should continue to expand efforts to increase Europe’s energy independence from an increasingly dangerous and unreliable Russia, or risk enabling Russia to use energy politics to fundamentally undermine U.S. policy in Europe and European security in coming years,” Holcomb said.