Trump’s Tariffs Would Be a Massive, Self-Inflicted Wound 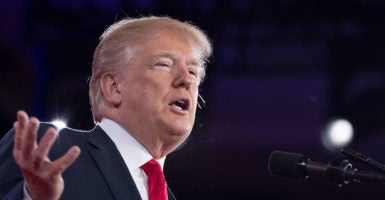 Oftentimes in global politics, a country will seek to punish its foreign adversaries by imposing economic sanctions against them, preventing them from purchasing goods or natural resources on the international market.

But this week, President Donald Trump is considering imposing economic sanctions on the United States, in the form of tariffs. This is being done in the name of benefitting our citizens, but that will certainly not be the result.

Make no mistake—some Americans will be badly hurt by the president’s plan to jack up the price of steel and aluminum by imposing tariffs on those imports.

A Commerce Department official has argued that these tariffs would have negligible effects on the economy as a whole. This will be of no comfort to workers who will lose their jobs when their employers find it economically unsustainable for their companies to buy—at inflated prices—the specialized steel and aluminum they need to manufacture auto parts, machinery, or other products.

As Christine McDaniel, a senior research fellow at the Mercatus Center, points out:

Does that mean that we should be dismissive of the large negative impact of the bridge collapse in Boston, or that we should dismiss the overall negative economic impact just because it is small? Of course not.

And this negative impact is only small relative to the enormous size of the overall U.S. economy.

According to a recent Heritage Foundation study, in 2016, steel-consuming manufacturers that would be harmed by the proposed tariffs employed roughly 6.9 million Americans and the construction industry that uses these metals supported another 10.1 million jobs.

That compares to just 140,000 directly employed by the steel industry whose wages might go up as a result of the rise in the price of steel.

A new report utilizing the same economic model as the Commerce Department found that the net job losses caused by the proposed tariffs will be 146,000 jobs. That’s more than the steel industry as a whole contains.

To be specific, it found that U.S. iron and steel employment and nonferrous metals employment would increase by 33,464 jobs, but the impact on the rest of the economy would be a loss of 179,334 jobs. In sum, the effects of these tariffs would be overwhelmingly negative.

Engaging in free trade with other countries is not a zero-sum activity. Winners from free trade vastly outnumber the losers both in and outside the United States.

Not so with the president’s proposed tariffs. The losers would dramatically outnumber the winners, and American workers and consumers would ultimately pay the price in the form of lower wages and lost jobs.