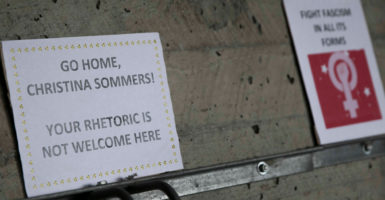 Student protesters sang, “No platform for fascists,” and chanted, “Rape culture is not a myth,” and “Microaggressions are real,” during a Monday speech by feminist scholar Christina Hoff Sommers at an Oregon law school.

Protesters at Lewis & Clark Law School interrupted the American Enterprise Institute scholar’s speech on multiple occasions. Sommers reported she was only able to give half of her speech.

“Alright, are you all finished?” Sommers asked the protesters. “Because I think the rest of the audience would like to hear what I have to say. So can you be quiet for a while? And then we can debate and reason together. How about that?”

This is what happened when @CHSommers tried to start her lecture. pic.twitter.com/WJrQGAnmkA

One student demanded that the scholar take questions during her speech, instead of afterward.

The protests followed a Sunday letter published by nine student groups demanding that the Lewis & Clark Federalist Society disinvite Sommers, whom they claimed was a “known fascist.”