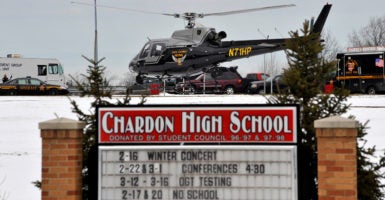 An Ohio State Highway Patrol helicopter prepares to leave the grounds of Chardon High School on Feb. 27, 2012, after a student opens fire with a handgun in the cafeteria, killing a fellow student and wounding four others before being chased from the building. Today, an Ohio-based program trains school staff to use firearms to defend against potential threats. (Photo: Ron Kuntz/Reuters/Newscom)

When a school shooting occurred barely an hour away, administrators with the Mad River school district in Riverside, Ohio, looked for ways to keep it from happening at their schools.

“The safety of our students is paramount,” Mad River Superintendent Chad Wyen told The Daily Signal. “After several shootings in schools across the U.S. and some locally, I found myself not asking why but what is the most logical thing I can do as a superintendent to keep students and staff safe in my district.”

A 14-year-old boy shot at two other students in the cafeteria of Madison Junior/Senior High School in western Ohio in a nonfatal encounter in February 2016.

By that July, the Mad River district’s Board of Education had voted to arm certain trained teachers and staff.

“After much research, discussion, and thought, it became clear that creating an armed response team was the best way to ensure children in Mad River would have the best chance to survive if confronted with an armed intruder,” Wyen said in an email to The Daily Signal.

“My hope is we will never have to deal with a situation like what happened recently in Florida. But if we do, I at least know that we had the tools and resources to save lives,” the superintendent said.

Mad River is among school districts in Ohio that have put teachers through a 26-hour, three-day course that exceeds the requirements of the Ohio Peace Officer Training Academy.

The school district worked with the Riverside Police Department and the Montgomery County Sheriff’s Office in implementing the program.

Trained Mad River faculty and staff have access to handguns that are locked in biometric safes during the school day in strategic locations; the safes open with the thumbprints of those authorized to use them.

“Teachers and staff apply. There is an interview process,” Alexander told The Daily Signal. “The training they receive is in line with police officer training.”

Teachers and staff from 76 of Ohio’s 88 counties have received training from a program called FASTER Saves Lives, which also has trained school personnel in 11 other states. FASTER stands for Faculty/Administrator Safety Training and Emergency Response.

Among the earliest school districts to enroll five years ago was Ohio’s Newcomerstown Exempted Village Schools, where designated school staff were authorized to carry concealed weapons.

Parents in Newcomerstown, near Columbus, asked for school personnel to be armed, Superintendent Jeff Staggs said.

“Training for the FASTER program is top of the line,” Staggs told The Daily Signal in a phone interview. “Some people try to say teachers are not qualified to handle guns. That’s insulting. I was obviously a teacher before I was a superintendent, and I wasn’t qualified to teach before I was trained.”

Staggs said some have tried to make the matter political, but locally it is viewed as keeping kids safe. He noted the rapid pace at which the gunman killed 17 in Parkland.

“When you have a stopwatch of death, time is not a luxury,” Staggs said, adding:

Who is calling 911 when you’re running away from a shooter? It takes a minute to get a call through to 911. It would take 50 seconds for 911 to connect to dispatch and another minute for police to arrive. That’s why 17 people can be shot in three or four minutes.

In the past five years, the FASTER Saves Lives program has trained about 1,300 school personnel at public and private schools from 225 districts across 12 states. Sponsored by the Buckeye Firearms Foundation, the program will train more than 200 this year, Director Joe Eaton told The Daily Signal.

The organization has two training facilities in Ohio, one in the town of West Union near Cincinnati and the other in the town of Rittman near Akron. It operates a third training center in Denver.

Eaton stressed armed response is just one facet of the program, which also trains school personnel on crisis management and emergency medical aid.

All training is at no cost to the schools. The program survives through private, individual donations, he said.

Under the program, generally only the superintendent, principals, and a few others are aware who is authorized to use the firearms.

Arming teachers has sparked a national debate since President Donald Trump suggested it as a solution in the aftermath of the Parkland, Florida, school shooting Feb. 14, in which a 19-year-old former student carrying an AR-15-style rifle killed 17.

American Federation of Teachers President Randi Weingarten said the union’s members are decidedly against the idea.

“I spoke to 60,000 educators last night in a telephone town hall,” Weingarten said in a public statement, referring to a Feb. 21 event. “The response was universal, even from educators who are gun owners: Teachers don’t want to be armed, we want to teach. We don’t want to be, and would never have the expertise needed to be, sharp shooters; no amount of training can prepare an armed teacher to go up against an AR-15.”

Eaton, director of the gun-training program, said he isn’t surprised about opposition from some.

“It is human nature to think of the one person you wouldn’t want to be part of this program,” Eaton said.

But, he added, once the public learns about the level of training that school staffs go through, they generally support the idea.

Since the idea of arming teachers leaped back into the news, Eaton said, the program has averaged 10 inquiries per day from teachers and administrators.

The Trump administration hasn’t been in contact with the organization, he said.

“We were a nonprofit educational charity who previously worked with youth firearms safety [and] suicide prevention, and partnered with the American Academy of Pediatrics here in Ohio to encourage safe storage of firearms by parents of young children,” Eaton said.

The program began to do firearms training for teachers in 2013, in response to the massacre at Sandy Hook Elementary in Newtown, Connecticut, where a young man shot and killed 20 children and six adults in December 2012.

“Five years ago, after Sandy Hook, we were contacted by schools wanting help to put together a safe and effective security plan,” Eaton said. “In short, we decided we were tired of watching our kids die in schools.”