Fact Check: What Percentage of Americans Have Concealed Carry Permits? 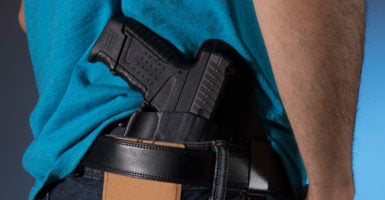 Kentucky Rep. Thomas Massie claimed recently on NBC that 8 percent of Americans outside of New York and California have concealed carry permits.

The Republican congressman’s figure holds up, although permits as a percentage of the adult population for all 50 states is lower at 6.6 percent.

Many Republicans, including President Donald Trump and Florida Gov. Rick Scott, have warmed to enacting new gun control measures in the wake of a Florida school shooting that left 17 dead. Recent polls indicate that around two-thirds of Americans, including—according to some polling—a slight majority of Republicans, support stricter gun control.

Yet Massie, founder and head of the Congressional Second Amendment Caucus, has remained steadfastly opposed to gun control measures that Trump, Scott, and even the National Rifle Association support. When asked about his views, Massie told NBC host Chuck Todd that gun culture is more widespread than he might suspect.

“You’re in a bubble. If you take out New York and California, 8 percent of Americans have concealed carry permits,” Massie claimed on “Meet the Press.” “And the people watching this show right now? There are a lot of them getting ready for church in middle America. Putting their guns on. Millions of them, they’re going to be carrying guns to church, and to family dinner after that, and they’re going to be safe.”

Data from the Crime Prevention Research Center, a pro-gun rights think tank, indicate that there are about 16.5 million active concealed carry permits in the U.S., only 182,000 of which have been issued by the populous states of California and New York. “Outside the restrictive states of California and New York, about 8 percent of the adult population has a permit,” a July report from the center noted.

The center’s data, which has been updated since July, reveals that permits as a percentage of the adult population is 6.6 percent for all 50 states.

The Government Accountability Office released a similar study about concealed carry licenses in 2012.

Data from that study, however, shows that permits as a percentage of the adult population (20 years of age or older) in states other than California and New York was only 4.2 percent in 2011, and only 3.5 percent for all 50 states combined—around half of what the Crime Prevention Research Center data suggests. (Although the GAO did not have permit data for five states.)

But due to a recent surge in concealed carry permits in the U.S., the GAO findings are outdated.

Although Massie’s figure is correct, the permit data it’s based upon does have some limitations.

The Crime Prevention Research Center, for example, lumps the permits that states grant to residents together with permits granted to nonresidents. Examining overall active permits may therefore involve double-counting of Americans who possess more than one concealed carry permit. (Many states, however, have agreed to honor each others’ concealed carry permits to prevent the need for multiple permits.)

The center reported that states have granted active permits to 15.6 million residents, so the real number of permit holders falls somewhere between 15.6 million and 16.3 million, according to its July report. The lower bound translates to 7.7 percent of the adult population outside of New York and California.

While millions of Americans have applied for concealed carry permits over the last decade, many states have scrapped the need for one altogether.

Just one state, Vermont, allowed constitutional or permit-less concealed carry in 2003. Eleven more states have passed or implemented permit-less carry laws in the time since. More than half of these states—Idaho, North Dakota, Missouri, Mississippi, New Hampshire, and West Virginia—have done so in the past two calendar years alone.

Studies suggest, however, that only a fraction of Americans who conceal carry actually do so on a routine basis. A recent study of 2015 survey data estimated that 9 million Americans carry at least once a month, while only 3 million do every day—about 1.2 percent of the American adult population.

Kush Desai is a fact check reporter for The Daily Caller News Foundation.