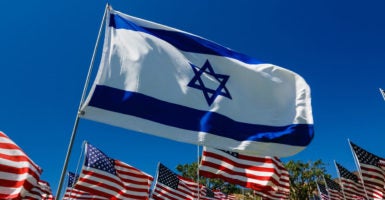 In speeches to fellow Jews around America, I often point out that many American Jews are experiencing cognitive dissonance.

The institution Jews most admire—the university—turns out to be the most significant source of Israel hatred in America and the rest of the West. At the same time, the people many Jews most distrust—Christians (especially evangelical and other conservative Christians)—turn out to be the Jews’ and Israel’s best friends.

Given that these two facts are undeniable, how do many American Jews deal with this dissonance?

They largely ignore the Israel hatred on campuses, and they dismiss the authenticity of the Christian support. They dismiss it by denying it is genuine. Christians who support Israel, they (and non-Jews on the left) argue, do so for two deceptive reasons.

One is they seek to convert Jews.

That Christians seek to convert non-Christians is, of course, true. The primary aim of Christianity, after all, is to spread belief in Christ.

But why would anyone think supporting Israel will convert Jews? Does anyone think that Christians who support Israel’s enemies are making Muslims convert to Christianity?

The fact is there isn’t a shred of evidence that Jews have converted to Christianity because of Christian support for Israel. Indeed, the Jews who most support Israel are either the most religious or the most strongly identifying secular Jews. Neither is a candidate for conversion.

Another way Christian support for Israel is belittled is by claiming that Christians support Israel in order to hasten the second coming of Jesus. But Pastor John Hagee, head of Christians United for Israel, the largest pro-Israel organization in America, has said countless times nothing a Christian can do will hasten the return of Jesus—only God will decide when that happens, and in His own good time.

Moreover, even if this were the reason Christians support the Jews and Israel, why would it disturb Jews? It would mean that Christians would support them until Jesus returns. What’s wrong with that?

Having spoken at numerous churches’ “Night to Honor Israel” events, I know how genuine this support is. But last week in Nashville, I witnessed a particularly convincing example of the sincerity of this support.

I spoke before thousands of Christians at the National Religious Broadcasters Convention when they gathered one evening solely to express their support for Israel. Maybe five Jews were present.

Isn’t thousands of Christians devoting an entire evening to express support for Israel—with essentially no Jews in attendance to witness it—about as convincing a proof of the authenticity of this support as one could imagine?

So, why do Christians support Israel? They believe in supporting American allies and supporting countries that share their moral values. And, unlike the left, they have moral problems with Islamism, not with Zionism.

But the primary reason virtually every Israel-supporting Christian gives is the biblical verse from Genesis in which God says to Abraham, “I will bless those who bless you and curse those who curse you.” These Christians believe (as does this Jew) God blesses those who treat the Jews decently and curse those who seek to harm the Jews.

You don’t have to be a believer in the God of Abraham or the Bible to accept this proposition. All the Jews’ ancient enemies disappeared from history.

And look at what happened to Spain after it expelled its Jews in 1492. One of the greatest powers of the world became largely irrelevant to history within a couple of generations.

As for Germans, the perpetrators of the Holocaust, they endured a staggering amount of death and suffering as a result of their support for the greatest Jew hater in history—and their country was divided in half for the next half-century.

Likewise, the countries today that most curse the Jews—Arab and other Muslim countries—are among the most benighted countries in the world. If they were to devote to building their countries the money and energy they devote to attempting to destroy Israel, they would be in far better condition morally, socially, economically, and politically.

Meanwhile, the country that has most blessed Israel and the Jews is America. No country in the modern period has treated its Jews as well as America has, and no country has stood by Israel as much as America has. And America has been almost uniquely blessed.

These American Christians know something that the secular and left-wing elites do not: The day America abandons Israel will be the beginning of the end of America as we know it.

These people are not fools. Their detractors are.