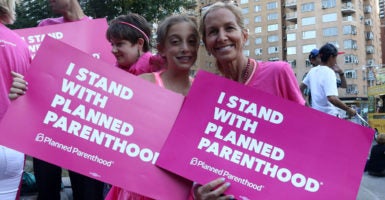 According to a report from BuzzFeed, organizations, including Planned Parenthood, Everytown for Gun Safety, and Moms Demand Action for Gun Sense in America, are backing the activism of some survivors of the Feb. 14 Parkland shooting that left 17 dead. (Photo: Nancy Kaszerman/ZUMA Press/Newscom)

According to a report from BuzzFeed, organizations, including Planned Parenthood, Everytown for Gun Safety, and Moms Demand Action for Gun Sense in America, are backing the activism of some survivors of the Feb. 14 Parkland shooting that left 17 dead.

These organizations are helping students plan for the March 24 March for Our Lives, an event, “to demand that their lives and safety become a priority and that we end gun violence and mass shootings in our schools today,” according to the website.

According to BuzzFeed, “A spokesperson for Planned Parenthood said the group is ‘teaching and hosting trainings’ for young activists across the U.S. ‘to keep momentum going so they don’t get burned out.’”

Conservative commentator Rush Limbaugh said he is not surprised liberal groups are working to support the gun control march.

“I just want to remind you that when I suggested that this was already happening, I was raked over the coals by the usual suspects in the drive-by media for the usual insensitivity and how dare he say something like that, you know, that kind of garbage,”  Limbaugh said Wednesday on his radio show.

The talk show host said conservatives should be careful to recognize how these students advocate their message, because he said he believes their advocacy could jeopardize conservative principles, such as Second Amendment rights.

“Whatever they say, whatever they advocate, if they hate the NRA, if they want to get rid of guns, if they start ragging on Republican politicians and [President Donald] Trump, well, then you can’t criticize them, because they’re the victims,” Limbaugh said. “And they’re not being political. So what they say, what they do is been hoisted up to a level supposedly above politics. And it makes them unassailable.”

On its Facebook page, the March for Our Lives says the event will end gun violence.

“On March 24 we will take to the streets of Washington, D.C., and our communities across the country,” a Feb. 18 post reads. “We will be the last group of students who have to stand up for fallen children due to senseless gun violence. March with us.’”